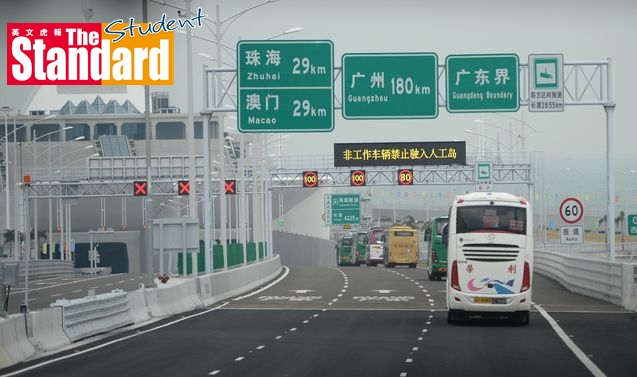 THE newly opened Hong Kong-Zhuhai-Macau Bridge (港珠澳大橋) was given a thumbs-up by travellers along its 55 kilometres on 24 October.
Initial statistics on bridge usage from SAR transport chief Frank Chan Fan (陳帆) included 100 cross-border coaches from Hong Kong to Zhuhai (珠海) and Macau (澳門). And 30,000 people arrived in Hong Kong via the new bridge.
Yet traffic was considered a bit of a disappointment. Between 9am and 3pm only 868 vehicles crossed the bridge or one every 30 seconds.
Still, travellers said they were happy to have a cheaper, quicker way to go to Macau and Zhuhai. The bridge opened to the public at 9am on 24 October following it being declared open by President Xi Jinping (習近平) the day before.
The opening attracted curious passengers eager to try out the route, with all seats in the first six buses heading from Hong Kong to Zhuhai taken.
Kwoon Chung Bus (冠忠巴士) arranged 31 coach services, which depart from Prince Edward (太子), Elements (圓方) in West Kowloon (西九龍) and Harbour City (海港城) in Tsim Sha Tsui (尖沙咀).
Besides direct bus services, shuttles also run between the ports. A Standard (英文虎報) reporter clocked a ride between Hong Kong and Macau at 41 minutes.
Passengers were full of praise for the new link, applauding its cheaper rates and reduced times.
Tung Chung (東涌) resident Ms Chan alighted from a bus in Zhuhai with a shout of “I’m so happy!” She had taken a B6 route bus to Hong Kong Port and then a cross-border bus to Zhuhai Port.
Chan’s trip to Zhuhai by bridge was much faster and cheaper than before. She said her entire journey took 90 minutes – half the time she spent previously. The three hours needed in the past came with travelling to Tsim Sha Tsui, mostly via the MTR and then a ferry ride to Gongbei (拱北) in Zhuhai.
Also, Chan added, she previously spent HK$20 for the MTR and HK$220 for the ferry. Now it is HK$7 for the B6 bus to Hong Kong Port and HK$65 for the cross-border bus to Zhuhai.
A Hong Kong-based surveyor named Chan who is working on a hotel construction in Macau said he took a day off to check if the new bus route is more convenient than his usual ferry ride.
“I left Kwun Tong for the port at 11am and arrived in Macau at 1.04pm, which is much quicker than taking a ferry,” he said. Going by ferry, he added, could take three to four hours if the weather was bad.
The Hong Kong-Zhuhai-Macau Bridge began construction in 2009, and took nine years to complete following delays.