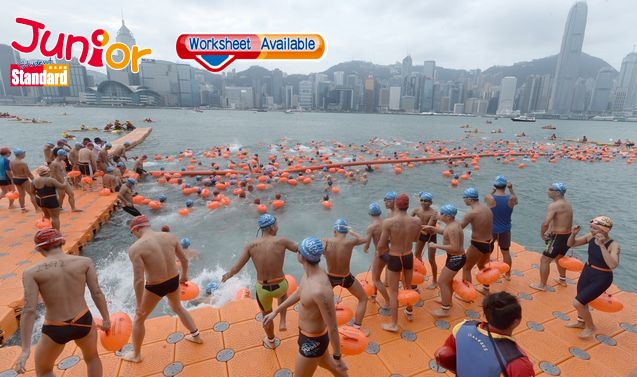 A RECORD 3,358 swimmers took part in the New World Harbour Race on 21 October, the highest number of participants since this century-old event restarted in 2011.
Some collided with one another at the start of the annual kilometre-long race across Victoria Harbour as they took on strong currents.
It is one of the most celebrated events in Hong Kong since it started in 1906, but the race was postponed from 1978 to 2010 due to pollution.
This year saw almost 5,000 applicants, but due to the limited places the organiser could only take 3,600 of the best performers from pool time trials.
Familiar faces at the swim included Secretary for Labour and Welfare Law Chi-kwong (勞工及福利局局長羅致光), legislator Vincent Cheng Wing-shun (鄭泳舜) and Centaline Property Agency founder Shih Wingching (施永青).
The oldest participant was, once again, evergreen Mabel Leung Yuen-ying (梁宛凝), who is 76 years old.
Various ferry services were suspended for three hours from 7.30am so that the course from Tsim Sha Tsui public pier to Golden Bauhinia Square (金紫荊廣場) in Wan Chai could be prepared.
The racers started in batches of 100, but some complained they got pushed or collided with each other at the start.


(This article is published on Junior Standard on 29 October 2018)