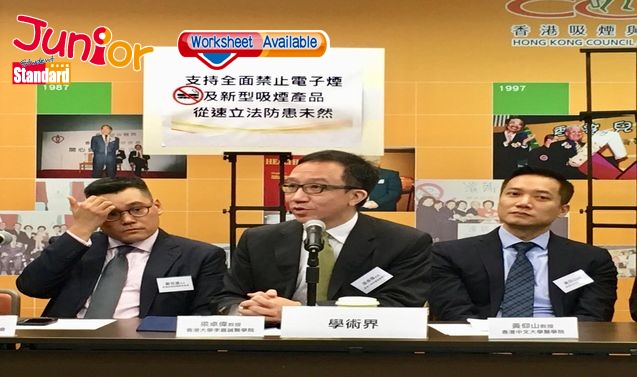 A BROAD cross-section of society offered support for a ban on e-cigarettes and called on authorities to act quickly.
This followed Chief Executive Carrie Lam Cheng Yuet-ngor (林鄭月娥) saying in her Policy Address that the import, manufacture, sale, distribution and advertising of e-cigarettes and other new tobacco products will be banned completely in the SAR.
Twenty-four groups from six sectors – tobacco control organisations, medical professionals, academia, education, youth services and medical patients – released a statement backing the initiative.
But some people voiced concerns about the ban on e-cigarettes tempting people to buy illicit products as regular cigarettes remain legal. And some called for new laws to be a priority in this legislative year.
Antonio Kwong Cho-shing (鄺祖盛), chairman of the Hong Kong Council on Smoking and Health (COSH), said legislation needed to be fast and effective to nip new tobacco products in the bud, as some might resort to lobbying and litigate against the ban.
Gabriel Leung Cheuk-wai (梁卓偉), dean of the University of Hong Kong’s Faculty of Medicine, said he appreciated the administration’s determination to adopt stricter tobacco controls.
Leung criticised some groups for opposing a ban on e-cigarettes and claiming such products can help smokers quit traditional cigarettes, but he noted they are backed by big tobacco firms.

(This article is published on Junior Standard on 24 October 2018)

Supporting the enactment of a total ban on e-cigarettes
http://goo.gl/NpHjkx