Most tofu not calcium-rich 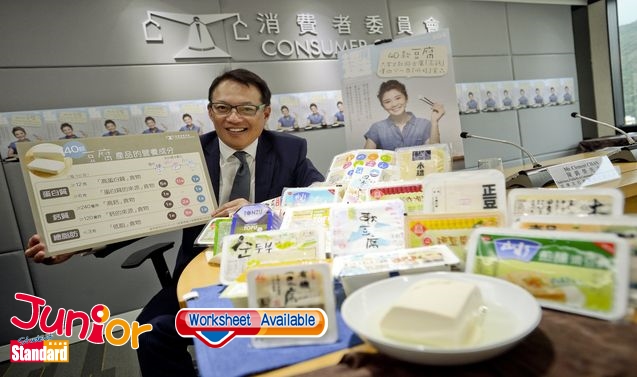 TOFU is generally considered a high calcium and low fat food, but the Consumer Council (消委會) found that most of the 34 pre-packed  samples and six dishes of tofu it tested were not up to scratch.
The average amount of calcium contained was 59mg per 100 grams – much less than the Centre for Food Safety’s (食物安全中心) standard of 240mg per 100g for high calcium foods.
Only two qualifi ed as ‘high calcium’. One of them was the Vitasoy Sansui hard tofu (「維他奶山水」有機黃豆硬豆腐), which contains 420mg of calcium per 100g, while a tofu dish sample from a soya delicacies shop in Kowloon City that contains 250mg of calcium per 100g also made the cut. Four other samples were also found to be ‘calcium food’ with calcium levels higher than 120mg per 100g.
The watchdog bluntly dismissed the rest for not being ‘high calcium food’, including one that contains only 16mg of calcium per 100g, 25 times lower than the highest calcium sample. The average calcium content of a tofu dish was 122mg per 100g – higher than pre-packed tofu as tofu dishes use calcium sulphate or edible gypsum as a firming agent.
Twenty-three samples did not even qualify as a valid source of protein, and only one-fourth qualified as ‘low fat’ food. Even so, the fat in tofu is mainly unsaturated fatty acids, which can reduce the levels of bad cholesterol and total cholesterol in the body, said the council.

(This article is published on Junior Standard on 23 October 2018)