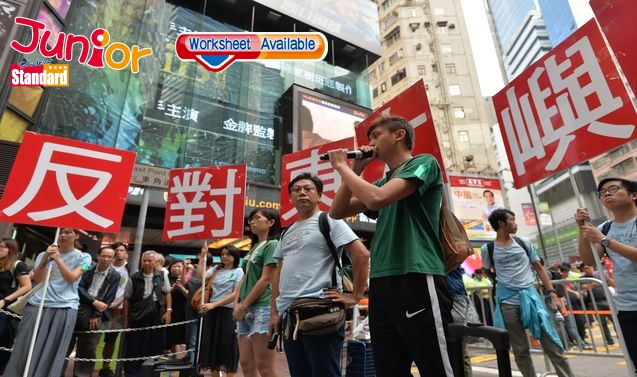 THOUSANDS marched to say ‘No’ to the proposed artificial island initiative as Chief Executive Carrie Lam Cheng Yuet-ngor (林鄭月娥) and her two top aides defended her ‘Lantau Tomorrow Vision’ (明日大嶼願景).
The 1,700-hectare island east of Lantau would cost “at least HK$400 to HK$500 billion”, according to government sources, while Lam believes “it will be expensive”, although she did not confirm the figure.
The scheme is an expanded version of the ‘East Lantau Metropolis’, which was previously in the government’s ‘2030+’ development plan and one of the 18 options in the Task Force on Land Supply’s public consultation.
About 6,000 people joined the protest staged by the Save Lantau Alliance (守護大嶼聯盟) on 14 October. Among the protesters were people who had been queuing for public housing flats for years. They believed there were many other alternatives such as using brownfield sites, or retaking Fanling golf course, which could supply land much faster.
The alliance said the government should know how many people opposed the Lantau Tomorrow Vision, and Lam’s claim that not many people were against the artificial island plan was false.
A speaker at the City Forum said no past government research reports had shown the necessity for 1,700-hectare reclamation, and criticised the government for developing a non-sustainable new town, given the continuous rise in sea levels and high prices.


(This article is published on Junior Standard on 22 October 2018)