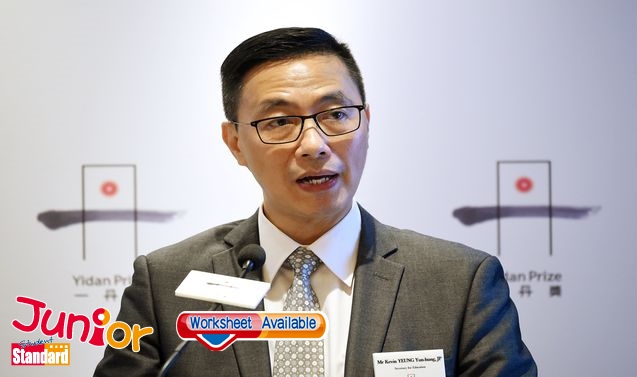 EDUCATION chief Kevin Yeung Yun-hung (楊潤雄) has questioned whether it would be sustainable to learn the Chinese language using Cantonese.
“Where can people learn Chinese using Cantonese? There’s none [except in Hong Kong]. Putonghua will be used predominantly in the future development of Chinese language around the world,” Yeung said on a radio programme.
He acknowledged the advantage of using Cantonese to read ancient poems. But he asked if it would be better for people to use Putonghua more often in their daily lives to get to grips with its slang.
In a subsequent Facebook statement, Yeung insisted that he was not questioning the use of Cantonese as a way to learn Chinese and that he was misunderstood.
He said he merely suggested experts delve further into the long-term development of Chinese education so as to consolidate the city’s strength in two languages and three tongues – Cantonese, Putonghua and English.
One Chinese language teacher worried that students learn better in their mother tongue and that teaching Chinese in Putonghua would affect their ability to absorb knowledge.
The Audit Commission revealed last year that while the Education Bureau (教育局) has set teaching Chinese in Putonghua as an eventual goal, it failed to back up the decision with research.

The use of Putonghua for teaching the Chinese Language Subject
http://goo.gl/KJwwiX