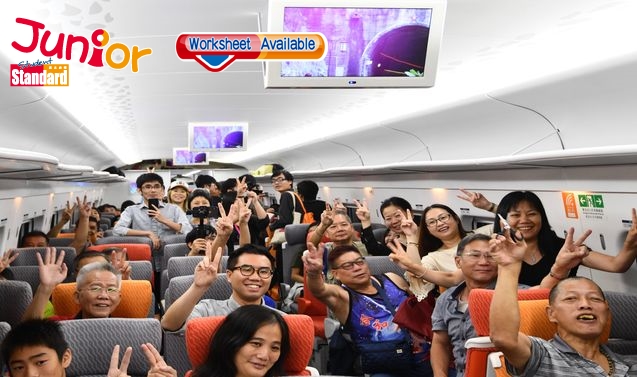 THE long-awaited Guangzhou-Shenzhen- Hong Kong Express Rail Link (廣深港高速鐵路) began running on 23 September. First day operations were mostly smooth, but there were also opening hiccups.
Delays, a power outage, baggage restrictions and ticketing arrangements were among the issues faced by the rail operator, as the HK$84.4 billion rail link started service after 18 years of planning and construction.
MTRCL Chairman Frederick Ma Si-hang (馬時亨) and Transport Secretary Frank Chan Fan (陳帆) attended a ceremony to welcome passengers.
Chief Executive Carrie Lam Cheng Yuet-ngor (林鄭月娥) visited West Kowloon Station for half an hour in the evening. She was satisfied with the overall operations, adding that glitches were normal for the launch of major projects.
The station opened to the public at 5am, with the first train leaving for Shenzhen North Station two hours later with about 500 passengers and arriving at its destination at 7.19am. However, some other trains encountered technical problems.
Luggage restrictions also caused problems for some Hong Kong passengers who had to leave their oversized bags behind.
The MTRCL said 71,000 people bought tickets for trains running on the first day, which was smooth overall.

(This article is published on Junior Standard on 03 October 2018)