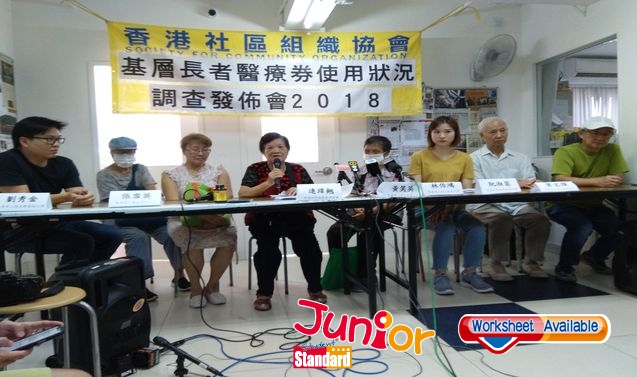 MANY elderly have been talked into buying unnecessary and expensive products with their health care vouchers, according to a survey conducted by the Society for Community Organisation (Soco, 社區組織協會).
Soco interviewed 101 elderly folk who live under the poverty line in order to research how the Elderly Health Care Voucher Scheme (長者醫療券) is being abused.
The scheme was initially implemented to ease the pressure on public services by diverting patients to the private sector. The poll, however, found that 59 percent of the respondents were unreasonably charged or prescribed with higher-priced medication when paying with the vouchers.
One 89-year-old woman was advised to use HK$3,940 worth of vouchers to buy two pairs of glasses at an optical store in Wong Tai Sin. She learned later from another store that she only needed one pair worth HK$1,200.
Other respondents reported they were advised to buy non-medical services or irrelevant products, such as herbal supplements, pain relief patches, milk powder for the elderly and even juices.
Since 2009, the allowance under the scheme was gradually raised from HK$250 to HK$2,000 a year for eligible elderly citizens. This year, there was a one-off addition of HK$1,000.
However, 73 percent said the allowance was not enough to cover their medical expenditure.

(This article is published on Junior Standard on 02 October 2018)