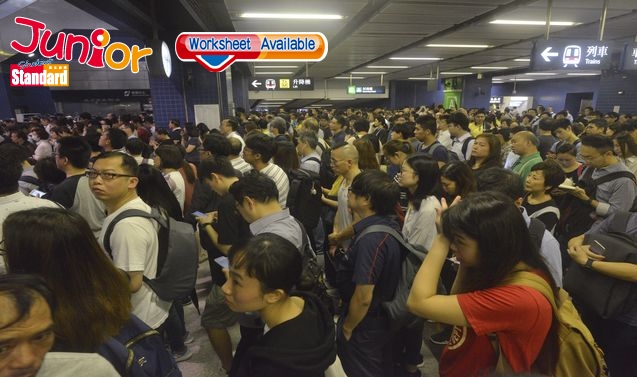 TRANSPORT chaos sparked anger as the four-million-strong workforce struggled to get to their jobs the day after Super Typhoon Mangkhut pummeled Hong Kong.
The government came under fi re for not suspending the return to work for a day. The devastating storm damaged public transport. Manyroads were blocked and trains were delayed.
The East Rail line between Hung Hom and Lo Wu or Lok Ma Chau was suspended until 6pm, when people were scrambling to get home after work. Bus services were largely suspended. The section of the East Rail between Tai Po Market and Sheung Shui was also halted. Thousands crammed into stations in Tai Wai, Kowloon Tong and Sha Tin, where trains inched along.
But people still had to go to work as Chief Executive Carrie Lam Cheng Yuet-ngor (林鄭月娥) had only urged employers and employees to be “understanding” towards each other instead of asking companies to suspend work.
People called the situation “modern slavery” and a “man-made disaster”.
Lam said the government had done sufficient and effective preparatory work to cope with the typhoon, and encouraging a mutual understanding was better than suspending work for a day.
Executive Council member Ronny Tong Ka-wah (湯家驊) defended the government, saying it was in no position to order the suspension of work in a capitalist and free society.

(This article is published on Junior Standard on 26 September 2018)

Storm beaten but it could be worse
http://goo.gl/Ru9vc9