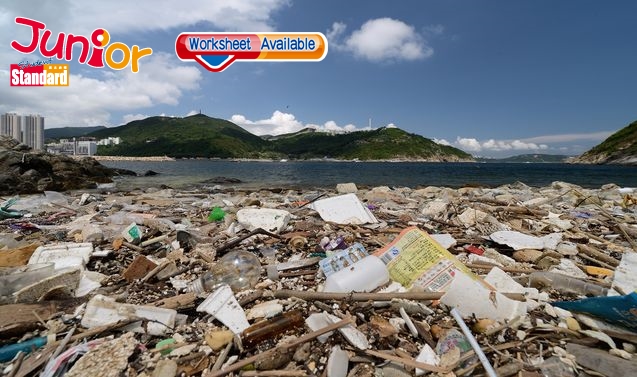 THE SAR government has underestimated the amount of garbage in the sea that comes from the mainland, a green group said.
The Green Earth (綠惜地球) accused the Environmental Protection Department (EPD, 環保署) of downplaying the severity of the situation as the department claimed only 5 percent of plastic bottle waste in the city came from China.
The department’s figures stem from their 2015 report – Investigation on the Sources and Fates of Marine Refuse in Hong Kong (香港海上垃圾的源頭及去向調查) – which identified the origin of marine debris by the language on the labels. It found that ‘local items’ comprised 95 percent of marine refuse, while non-local items contributed approximately 5 percent.
However, Green Earth has discovered that 38 percent of plastic bottles found in Hong Kong contained labels in simplified Chinese, significantly higher than the statistic put forth by the department.
The group added that the report categorised waste without labels as local items but these could well have been from the mainland, considering the water flow.
In their Short-lived Plastic Campaign (短命膠品牌調查), Green Earth visited 10 places, where 38 percent of the 1,776 plastic bottles found had simplified Chinese labelling. The group said reducing waste from its point of origin is the ideal way to combat the problem. The mainland and Hong Kong should also cooperate and change the situation.


(This article is published on Junior Standard on 19 September 2018)