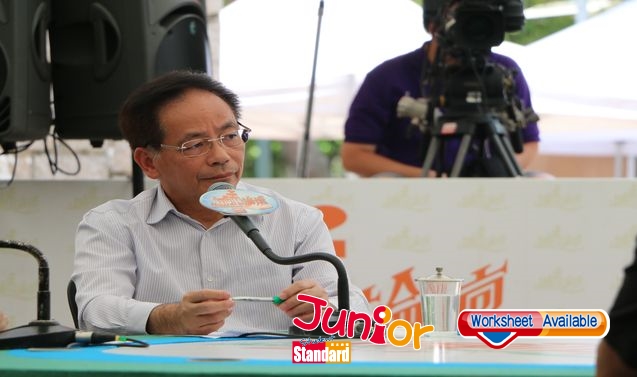 THE attack on a NowTV cameraman was fueled by a human rights lawyer snatching a press pass from public security officers, National People’s Congress Hong Kong deputy Ip Kwok-him (葉國謙) told the City Forum. Such behaviour could be considered assaulting police in Hong Kong, he said.
Mainland authorities were put under scrutiny after two incidents of Hong Kong reporters suffering from violence. One was in Sichuan province when Cable TV reporter Chan Ho-fai (陳浩暉) was beaten up by two officials on 12 May. Another was in Beijing when NowTV’s Chui Chun-ming (徐駿銘) was pinned to the ground, handcuffed and arrested by police on 16 May. He was released after signing a written repentance.
Ip said although it was lawyer Xie Yanyi (謝燕益) who seized the pass from police, the incident happened because Chui received his pass from Xie.
But Hong Kong Journalist Association chairman Chris Yeung Kin-hing (香港記者協會主席楊健興) said none of the videos showed the cameraman had assaulted police, and criticised the SAR government. “The government knew that a Hong Kong reporter was arrested and couldn’t even contact anybody from the outside, so why didn’t the government take the initiative to contact the reporter to offer help,” Yeung asked.
Veteran journalist Ching Cheong (程翔) disagreed with Ip, saying that China had been hostile to press freedom. The number of reporters arrested in the mainland last year soared to 47, compared with about 20 in 2012.

(This article is published on Junior Standard on 29 May 2018)