Protest failed to save old trees 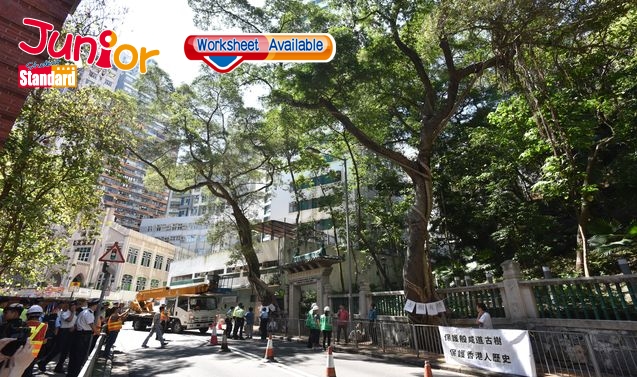 PROTESTERS failed to stop the Lands Department (地政總署) from cutting down two 80-year-old banyan trees on Bonham Road (般咸道), next to the University of Hong Kong.
The two trees were not on the Register of Old and Valuable Trees. Deemed unhealthy and a danger to pedestrians, they had to be cut down before the typhoon season begins.
The department originally planned to start the work at 6am, but lawmakers Ted Hui Chi-fung (許智峰), Au Nok-hin (區諾軒) and Tanya Chan (陳淑莊), together with conservationists from Green Sense (環保觸角), hung banners at the site asking the department to preserve the trees. “The trees are crying,” protesters chanted.
The two sides were in a standoff for the morning. But department staff started work at 3pm and removed the trees overnight. The issue of the two trees was first raised in 2015 after the Lands Department cut down five other banyan trees on the road. The department told a district council meeting on 17 May that rot was discovered in holes, while a fungal infection was identified in the bases.
It said the safety threat posed by the trees has increased over the years. Bonham Road has narrow pavements with many people passing by, and the government could not install large-scale frames to support the trees. Wind and rain will affect the stability of the two trees and the wall during the typhoon season, it said.

(This article is published on Junior Standard on 28 May 2018)