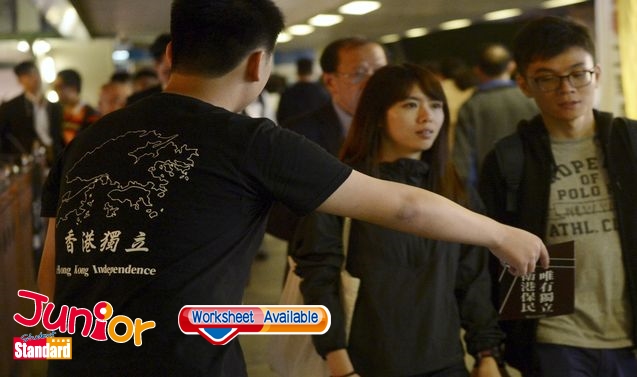 THE independence issue was back on the table at 12 schools, thanks to leaflets passed out by the Hong Kong National Front (香港民族陣?) and Studentlocalism (學生動源).
There were reports that some teachers stopped their students from distributing them to classmates but one of the organisers vowed the campaign would continue. The front said the leaflets were handed out to students at 10 secondary schools and two universities.
“Only independence can protect Hong Kong and its citizens,” according to a leaflet. Another stated that independence from China will put Hong Kong “back on the right course”.
The groups posted an online application form for those interested in helping with the distribution. The front convener, who goes by the name of Louis, said about 2,000 leaflets and 10,000 stickers were printed.
Studentlocalism convener Tony Chung Hon-lam (鍾翰林), a secondary student, said they will set up booths on the street to convey pro-independence views.
The Education Bureau called upon the education sector “to stop pro-independence activists from disseminating to students messages which are in violation of the Basic Law”. Education sector lawmaker Ip Kin-yuen (葉建源) said political promotions at secondary schools are “not ideal” and those involved should stop. Lawmaker Priscilla Leung Mei-fun (梁美芬) said schools should “punish and educate” the ones involved.
Pro-independence banners that appeared at several universities has sparked a fierce debate.

(This article is published on Junior Standard on 22 November 2017)