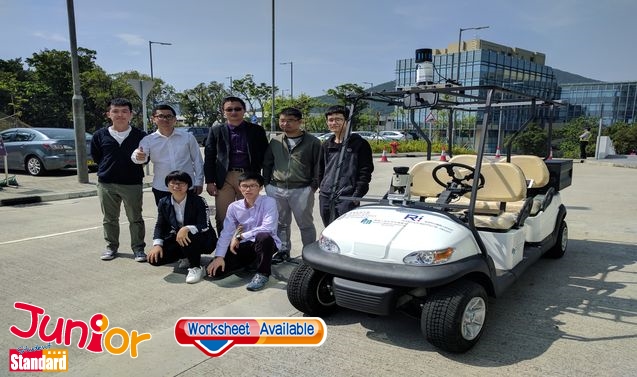 A LOCAL university is making inroads in developing driverless cars. As a first step, engineering students at the Robotics Institute of the University of Science and Technology (香港科技大學機器人研究所) built an unmanned golf cart.
During a demonstration, the vehicle drove HKUST president Tony Chan Fan-cheong (陳繁昌) for a while in a car park on the Clearwater Bay campus.
The cart boasts functions that include obstacle avoidance, mapping and navigation. It costs less than HK$140,000, and took only three months to build.
The eight-member team of students and research assistants developed a computer and a central processing unit to control the vehicle. And two laser sensors were installed, one on top for mapping routes and the other in front of the steering wheel, which is able to detect obstacles from one to 75 metres, even in the dark.
The team supervisor, assistant professor Liu Ming (劉明), said Hong Kong is suitable for autonomous driving as road conditions are good and drivers generally follow traffic rules.
“We believe this is the starting point for a new generation of unmanned vehicles that will save manpower and enhance safety,” Liu said.
The team hopes to test the technology on passenger cars but current local laws do not allow them to test it on a private car, so they tried it on a golf cart.
The golf cart can run at 20 kilometres an hour and go for 40 to 60 kilometres before recharging its battery.


(This article is published on Student Standard on 07 November 2017)