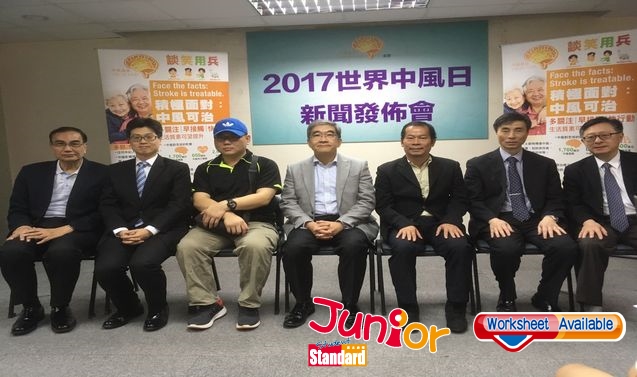 YOUNG people are facing a greater risk of stroke than their parents’ generation as they exercise less, eat an unhealthy diet and play more with their phones, doctors warned on World Stroke Day.
The Hong Kong Stroke Fund (香港中風基金) polled students from 83 schools and found that about 70 percent of pupils use their phones and computers for four hours or more a day, and 40 percent exercise for less than an hour a week.
Sixty percent eat vegetables that make up only one-third of their meals, while 30 percent avoid fruits.
A neurologist said stroke usually occurs after the age of 65 but if youngsters keep their unhealthy habits, they could suffer from stroke as early as 40. Earlyonset cases are largely due to unhealthy eating habits and lack of exercise, which lead to high blood pressure and diabetes, the most common risk factors for stroke.
Stroke is the No 4 cause of death in Hong Kong. One in six people suffer a stroke in their lifetime. Of more than 25,000 stroke cases every year, about 3,500 are fatal.
Strokes occur when blood supply to the brain is reduced or blocked for certain reasons, leading to a sudden lack of oxygen in the brain cells, causing the brain to lose its functions. Symptoms include paralysis, unconsciousness, speech impairment, memory loss and damage in critical-thinking ability.
Youngsters are advised to stick to a diet that is “three lows and one high” – low in sugar, sodium and fat but high in fibre, and refrain from smoking, which doubles the risk of stroke.

(This article is published on Student Standard on 06 November 2017)