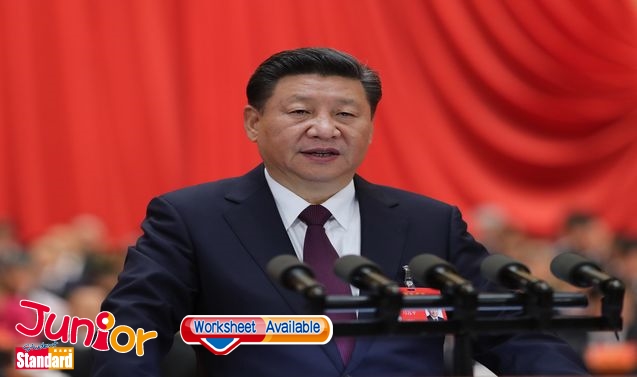 PRESIDENT Xi Jinping (習近平) says Beijing exercises “overall jurisdiction” over Hong Kong and Macau and that “one country, two systems” is the best solution in the two special administrative regions.
Xi talked about maintaining a “tight grip” on Hong Kong while delivering a work report at the opening of the 19th national congress of the Communist Party in Beijing, but did not make direct reference to independence calls.
“We have fully and faithfully implemented the principle of One Country, Two Systems and ensured that the central government exercises its overall jurisdiction over Hong Kong and Macau as mandated by the Chinese constitution and the Basic Law of the two Special Administrative Regions,” Xi said.
He stressed on Chinese patriots playing a major role as the Hong Kong people govern Hong Kong and the Macau people govern Macau.
“We will develop and strengthen the ranks of patriots who love both our country and their regions, and foster greater patriotism and a stronger sense of national identity among the people of Hong Kong and Macau,” he said.
The former director of the Hong Kong and Macao Affairs Office, Wang Guangya (王光亞), said Beijing’s attitude towards Hong Kong’s independence is clear:“Don’t do anything that would damage national sovereignty, security and development interest.”
Democratic Party chairman Wu Chi-wai (胡志偉) expressed concerns that Xi reaffirmed Beijing’s tight grip over Hong Kong. New People’s Party chairwoman
Regina Ip Lau Suk-yee (葉劉淑儀) said Xi stressing control over Hong Kong showed that Beijing is worried about separatism in the city.


(This article is published on Student Standard on 26 October 2017)