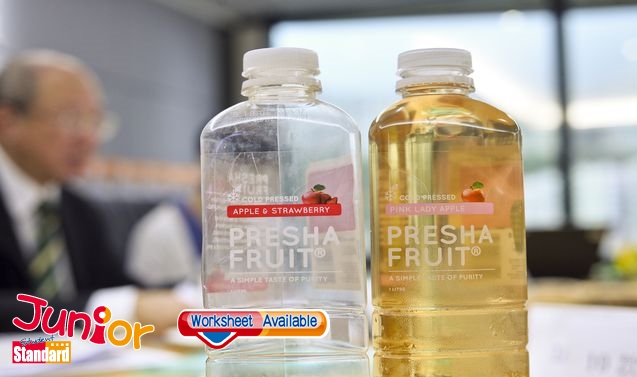 TWO apple juice drinks from Australia (澳洲) were pulled off the shelves after being found to contain excessive levels of a fungal toxin that can cause disease and even death.
Tests also found that fruit juice drinks sold in Hong Kong contain much more sugar and have low levels of vitamin C and dietary fibre. Preservatives were also discovered in samples that claimed to be preservativefree.
The Consumer Council (消費者委員會) tested 40 prepackaged chilled fruit juice samples – 8 apple, 19 orange and 13 blended fruit juices.
It found the Australian brand Preshafruit’s coldpressed apple and strawberry drink, and its pink lady apple drink contained patulin – a fungal toxin usually found in rotten apples and grains – at 138 and 67 micrograms per kilogram respectively, against Centre for Food Safety’s limit of 50 micrograms per kilogram.
High level exposure of patulin over a short period of time could cause gastrointestinal problems, including bleeding and ulcers.
The council’s tests also found all 40 samples contain more than five grams of sugar per 100 millitres, with the highest – Stay Juicy’s apple juice – being 12.9g per 100ml. Drinking a 360ml bottle of the juice would mean consuming 46g of sugar.
Too much sugar in food can increase the risk of obesity, diabetes and tooth decay.
Compared with eating the same amount of fruits, juice drinks are twice as expensive but have fewer benefits and many bad components like sugar


(This article is published on Junior Standard on 24 October 2017)