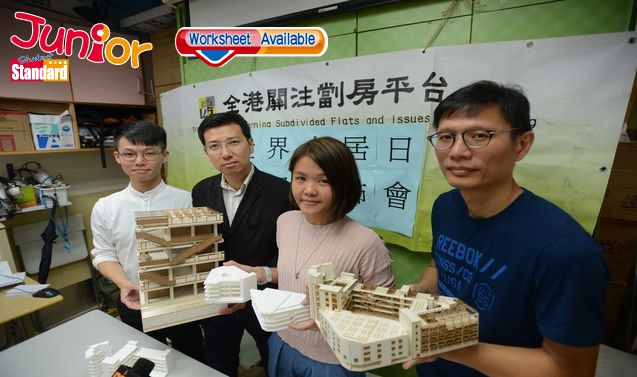 THE government is urged to transform abandoned schools into flats for the needy.
The joint proposal came from the Platform Concerning Subdivided Flats and Issues in Hong Kong (全港關注劏房平台) and the architecture department of Chu Hai College of Higher Education (珠海學院).
It is based on Chu Hai architecture master’s student Victor Chu Wing-chun’s (朱榮臻) design to turn the idle St Joseph’s Anglo-Chinese School (聖約瑟英文中學) into 100 flats for over 300 people to live in.
He proposed tearing down non-load-bearing walls in the school and reconstructing classrooms and playground areas into flats using modules. The flats are six to 24 square metres (64.6 to 258.3 sq ft), with independent toilets and kitchens. Only half of the campus is for the flats, with the remainder reserved for public spaces, including a children’s playground and flea market. Target residents are households queuing for public housing for at least three years, and those who are forced to move because of reconstruction.
The group said turning idle schools into transitional housing can alleviate the difficulties for subdivided fl at residents. The group said there were 55 idle schools in Hong Kong, and it was a waste that they had not been fully utilised. The proposal needs 1.5 years to implement, and has been submitted to the government for consideration.
Last month, the Hong Kong Council of Social Service launched an affordable transitional housing scheme, the Community Housing Movement, that aims to provide 500 units for 1,000 households.


(This article is published on Junior Standard on 11 October 2017)