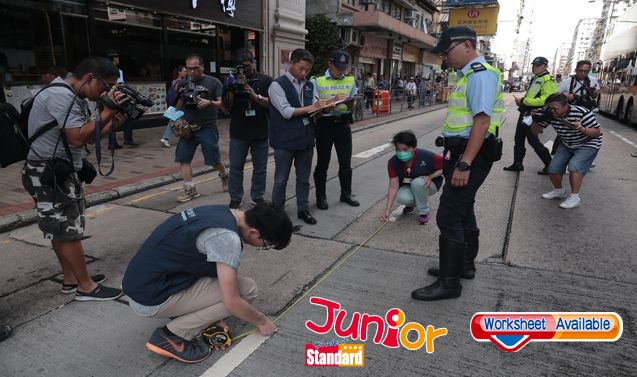 THE driver of a bus that knocked down pedestrians and hit a building in Sham Shui Po, killing three people and injuring 30, worked for 13 hours a day for some time before the crash on 22 September.
Citybus head of operations William Chung Chakman(城巴營運總監鍾澤文) admitted this but said the driver sought extra hours, which did not violate Transport Department (運輸署) guidelines.
Police meanwhile were at the junction of Cheung Sha Wan Road and Yen Chow Street, where two pedestrians and a passenger on the upper deck of the bus suffered fatal injuries. Offi cers measured tyre marks as they sought to determine if the 44-year-old driver, who was unhurt, was speeding.
Chung, who said Citybus drivers have at least 10 hours off between shifts, also claimed on radio: “Working overtime for 13 hours a day is not a common practice within the company. Drivers usually work 10 hours a day on average while the driving time is around eight hours.”
But the Motor Transport Workers General Union’s Citybus branch said it is common for drivers to work overtime as pay is only about HK$15,000 a month.
Chief secretary Matthew Cheung Kin-chung (張建宗) acknowledged a need to review hours, though the Transport Department already has an independent agency carrying out annual checks on whether bus companies follow suggested working hours.


(This article is published on Junior Standard on 3 October 2017)