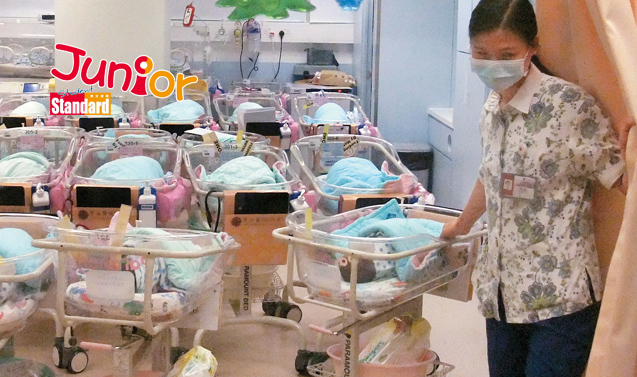 It is a metaphor describing overly dependent adults in China. They may have jobs and not live with their parents, but they mentally cannot lead an independent life.

RECENTLY in China, a psychology book titled The Country of ‘Giant Babies’ (《巨嬰國》) was pulled from shelves. The authorities said it may harm Chinese traditions and beliefs. It depicts the child-like mentality of Chinese adults, and how these ‘giant babies’ still need parental care. Some of them are self-centred and do things their own ways. Some of them blindly follow the instructions given by their parents. While China has a tendency to control the flow of sensitive and negative information, the banned book might have hit the nail on the head.

THE phenomenon of having immature adults in society is common in Asian countries, suchas ‘Kong kids’ in Hong Kong, ‘NEET’ in Taiwan (台灣) and hikikomori in Japan (日本). All these terms describe people who cannot take care of themselves or interact with others. They may also sponge off their parents.

How do they emerge?

PARENTING is a key factor. Traditionally, Chinese have been taught from childhood to obey their parents, while parents have a lifelong responsibility to nurture and guide their children. For that matter, modern families are generally better off. The parents are well educated and can afford to spend more money and resources on children. They are also prepared to help children make choices and decisions. Thus, the kids grow up lacking opportunities to think critically and independently. The over-protective parents also discourage them from developing opinions. The One Child policy since 1979 has in particular contributed to the emergence of spoiled and overprotected grown-ups of today.

WE cannot blame the cultural factor solely. The skyrocketing land prices and higher costs of living in mainland China and Hong Kong might also be external factors deterring grown-ups from living independently. An international report from last year also found out that the age at which Hongkongers think it is still okay to live with their parents is 41. It is the highest still-living-at-home fi gure, while the global average age is 32.

1. Why are there ‘giant babies’ in China, and likely other places?
2. What are the adverse impacts on society if grown-ups are too dependent on their parents?
3. What roles should parents play in their children’s growth?
4. What age do you think a person should move out and live independently of parents?