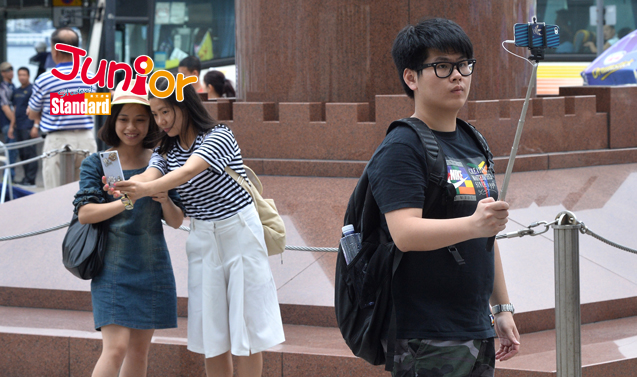 There is no denying that selfies are an ingrained part of our culture. As of April 2017, there are nearly 300 million posts with the tag ‘#selfie’ on Instagram alone, not to mention other social media platforms like Facebook and Twitter. The global phenomenon raises eyebrows though. Some are worried that it is a sign of worldwide self-obsession.

Self portrait or plain selfish?

Is it self expression, or narcissism? Opinions are divided on whether selfies do us good or harm.

IF you are on a plane and a man suddenly claims that he is wearing a belt of bombs, what will you do? For the 26-year-old British man Ben Innes, he asked the cabin crew to help him do one thing: ask the bomber if he was willing to take a selfie with him. The hijacker agreed, and Innes sent the selfie to his friends, while he was still being held hostage. A relative later tweeted, “Only Ben could get a selfie! #proud”. Luckily, the hijacker eventually surrendered. The ‛bomb’ was found to be a fake, and no one was hurt. Innes later told a newspaper, “It has to be the best selfie ever”, while security experts called what Innes did “highly irresponsible” and “utter madness”.

YOU may laugh at how ridiculous this incident sounds but this hijacking, which took place one year ago in Egypt, is a typical example of the huge impact selfies have on us. Innes is not alone when it comes to shocking selfie attitudes. Last October, a Mexican woman was bashed for posting a selfie at her grandfather’s funeral. In April, a woman fell from one of the tallest bridges in the United States as she tried to take a selfie.

With controversies and accidents related to selfies on the rise, society is beginning to ponder how the prevalent selfie culture is shaping us.

FROM superstars to the tech-savvy elderly, almost everyone has taken a selfie. A number of factors contribute to the rise of the selfi e phenomenon:

Thanks to the frontal camera installed on smartphones along with handy tools like selfie sticks, taking a photo of oneself has never been easier.

Social networking and photo editing apps installed on smartphones make it easy for us to share our selfies. Uploading your pictures to social networks becomes a way to connect with friends. ‛Likes’ given to selfies provide us with a sense of social approval and acceptance.

3. Self-identity and sense of control

Unlike conventional photos, which are taken by someone else, selfies give us total control of how we look. By looking at ourselves via the lens, taking selfies allows us to explore selfidentity and self-image.

THERE have been many studies on how selfi es affect us, but their conclusions vary hugely. Researchers at the University of California, for example, conducted an experiment with 41 college students and concluded that selfies boost happiness and confidence.

While it seems that scientists have yet to agree on the impact of selfies, it is certain that safety and manners should come first when you take your picture. Be aware of your surroundings, and keep your phones away in circumstances of grief or solemnity.

1.Selfies have become a global phenomenon thanks to the handy technology, the popularity of social networks and the promotion of self-control and self-approval.

2. There have been incidents concerning selfie manners and taking selfies in dangerous circumstances.

3. Some argue that selfies boost self understanding. A study suggests that they make us happier and more confident.

4. Some researchers point out that posting selfies may make you seem narcissistic, while exposing yourself to selfies could hurt your self-image.

1. How often do you take selfies? How much time do you spend taking them?
2. How do you feel about others’ selfies?
3. Why do people enjoy taking selfies?
4. Can you list some pros and cons of taking selfies?