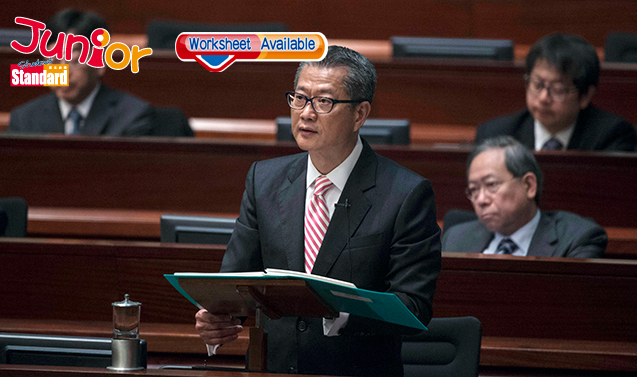 Chan dropped the good news on lawmakers during the second reading of the Appropriation Bill (撥款條例草案) in the Legislative Council.

He said the latest projection for the government’s surplus in the 2016-17 fiscal year was HK$110.8 billion – HK$18 billion more than the previous figure of HK$92.8 billion.

About HK$13 billion came from increased revenue from land sales, while the remaining was saved from government spending.

Chan had budgeted HK$78.6 billion for education this fiscal year in his February budget speech. The additional HK$18 billion pushes the education budget to a record high of HK$96.6 billion.

The extra funds will be entrusted to the Education Bureau (教育局) for uses including higher education improvements and additional resources for research and development, with details to be worked out.

Education sector lawmaker Ip Kin-yuen said education had been neglected by the government for the past fi ve years, as reflected by the low recurrent expenditure of HK$72 billion last year.

He was concerned about the sustainability of the funding, which is a one-off.

Ip suggested reserving part of the fund while spending the rest on solving urgent issues including increasing subsidies for students enrolled in self-fi nancing programmes in higher education.

(This article is published on Junior Standard on 5 May 2017)

Time to open the coffers
http://goo.gl/EIoEz9