Twisting through the air 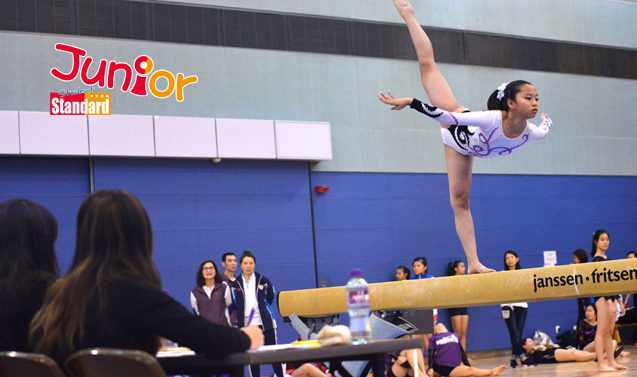 Gymnastics is not as prevalent as other school sports like basketball or swimming. It is partly because it not only requires strength but also balance and flexibility. Individual gymnasts need to compete skilfully and elegantly on specialised apparatuses. These all make gymnastics a demanding yet fascinating sport.

The limits of the body

Gymnastics has a long history. It not only lets us appreciate the body’s beauty and capabilities but also teaches us how to endure in the face of setbacks.

GYMNASTICS was invented in Greece (希臘) long ago and was intended to train military men. It was gradually modified into a competitive sports event, and in the late 19th century it was included in the first modern Olympic Games. The contest was originally limited to male gymnasts until 1956, when both men and women could participate in Olympic events.

Unlike most other sports, which use the same scoring system and events for both men and women, artistic gymnastics (競技體操) has different competitive events based on each sex. While all gymnasts can compete in the floor exercise (自由體操) and vault (跳馬), women’s events also include the uneven bars (高低杆) and balance beam (平衡木). For men, they compete on the pommel horse (鞍馬), still rings (吊環), parallel bars (雙杆) and horizontal bar (單杆).

Gymnasts need to perform a series of moves and skills at various levels of difficulty smoothly. There are compulsory moves that the athletes must finish. Meanwhile they can also design their own moves to add to their routine.

EARLIER this month in Hong Kong, the inter-secondary school gymnastics competition fi nal was held. Young gymnasts enjoyed the contest and demonstrated the spirit of sportsmanship. Three of them shared their gymnastics stories with Junior Standard.

The 17-year-old Mandy Wu Yanyin (胡恩賢) from St Rose of Lima’s College (聖羅撒書院) started practising gymnastics when she was four years old. But in January she injured her cruciate ligament so badly that she had to stop gymnastics training for a year. “I was really upset because I had been practising the moves on the vault for months,” Mandy said. She now understands that no matter what the situation is, she has to stay positive to quicken her
recovery.

Her peer Alice Lam Hoyee (林可兒) from True Light Middle School of Hong Kong (香港真光中學) came fourth in the balance beam of the junior group. The 16-year-old is also a hurdler at school, and has a hectic schedule especially when competitions are around the corner. “After school, I start practising the hurdles and then hurry to gymnastics training that start at 6.30pm,” she said, “It is about 10.30pm when I am finally back home.” But she always feels gratified whenever she can successfully perform the moves.

The 13-year-old Wincy Pun Wingsum (潘穎心) from Maryknoll Convent School (Secondary Section) (瑪利諾修院學校(中學部)) has received training for 11 years. She came first in the vault and second in the floor exercise of the novice group. When she was in Primary Six, she won the individual all-round competition, and was recruited to the Hong Kong gymnastics team. However, the training was excruciating to her. “It was a long way from my school in Causeway Bay to the training venue in Shun Lee Estate [in Kwun Tong].” Despite thinking of quitting gymnastics, Wincy did not give up. She has joined a different sports association where she has met many good friends.

GYMNASTICS requires physical strength, balance, flexibility, agility and control. Techniques include bending and stretching the body, swinging on bars, pivoting on one foot, leaping, turning, and many others. To unleash their full potential, gymnasts all start training at a very young age. Though the prime time of most gymnasts is in their teens, the 41-year-old Oksana Chusovitina from Uzbekistan (烏茲別克) is still competing in international events, even after becoming a mother. She has joined seven consecutive Olympic Games since 1992, when most gymnasts only last for one or two Olympic Games. Meanwhile, the 91-year-old Johanna Quaas from Germany (德國) is the world’s oldest gymnast. She still occasionally joins amateur contests!

1.Do you play any sports? Is it a team or individual sport?
2.How do you feel about that particular sport?
3.hat are the benefits of doing sports?
4.What else can you learn or acquire while playing sports?

Samba farewell ...
AFTER more than two weeks of e...