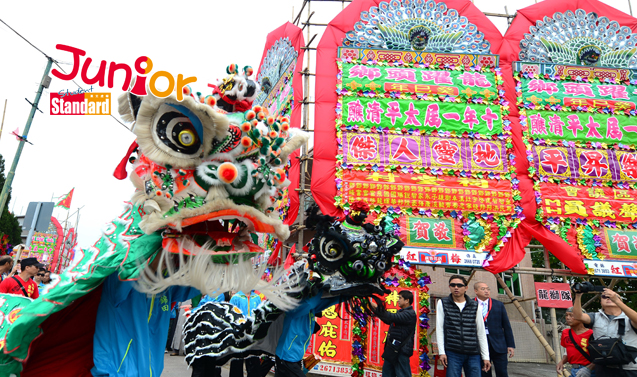 April is the fourth month in a year and today is the fourth day in this week. In Chinese culture, the number four is unlucky because ‘four’ sounds like ‘death’ when spoken in Cantonese. While most people believe superstitions are bogus, some say it is scientifically proven they boost our confidence.

Many cultures have sets of superstitions believed to keep people safe and bring luck. Many Chinese are keen on sticking to traditional and superstitious beliefs in their daily lives to stay on the safe side.

HAVE you ever heard people say ‘finger crossed’ to wish you good luck? Do you think it can really bring you luck? Some may say believing in luck is unscientific but a few years ago researchers in the UK (英國) wrote a book titled The Science of Superstition. They talked about how they designed several experiments to see how superstitions improve students’ confidence and performance. They found out that if students believe in luck, they performed signifi cantly better in a given task or test. Also, their confi dence was boosted, and they set higher goals for themselves.

Though the research did not test the effects of superstitions linked to bad luck, superstitions often help people make daily decisions. In China, people from all walks of life like doing small rituals to try and summon fortune, health, prosperity, happiness, or wealth accordingly.

WE all wish to have high status, prosperity and longevity. Thus, the Chinese have long worshipped the three gods Fu, Lu and Shou (福祿壽), together known as the Three Stars (三星), to summon good fortune. We may place their porcelain figurines at home or see their images in shops. But this custom is only local to Chinese communities. Japanese (日本的) businessmen usually put a beckoning cat (招財貓) in shops to attract customers and bring fortune.

IN Buddhism (佛教), which fi rst appeared in Indian (印度的) culture, lions are mythical beasts and are a symbol of power, wisdom and fortune. Since many Chinese are Buddhists, there are often lion dances during the Chinese New Year and other celebrations to bring blessings to the community. In a business opening ceremony, guests can dot the ‘eyes’ of a lion to scare evil spirits. Then the lion dance is performed to bring prosperity, customers and hope to the new shops.

The god of doors

TO keep bad luck and evil spirits away from homes, the Chinese have long stuck paper with images of menshen (門神), or door gods, onto their doors or gates. The two door gods should be face-to-face and not looking away from each other to avoid bad luck. These days, it is rare to have paired doors, so this special ritual has been gradually forgotten. But in some ancestral halls in the New Territories, people still keep this tradition.

THE Chinese believe that placing guardian lion statues at the entrances of restaurants or buildings can bring power and positive energy to people inside, and protect them from bad luck. The statues are usually made of marble, stone or bronze. They come as a pair of male and female lions. To tell them apart, we can look at their front paws. There is a ball under the male’s right paw and a cub under the female’s left paw.

THE number four is considered unlucky in Chinese culture, so some buildings skip numbering floors ending with ‘four’, such as ‘14’, ‘24’ and so forth. In the West, the number 13 is also traditionally seen as bad luck. There are many myths explaining the superstition, and westerners are so afraid of ‘13’ that there is even a word for this fear –triskaidekaphobia.

RED is a popular colour in Chinese culture because it wards off bad luck, scares away evil spirits and symbolises brightness. As the Chinese legend goes, a ferocious monster called Nian (年獸) wrecked villages at the start of the New Year. It ate crops, livestock and even kids. It feared nothing, except fire, noise and the colour red. So the villagers made loud noises, lit up fires and coloured everything red. Since then, the auspicious colour is seen to bring good fortune, and of course money in red packets!