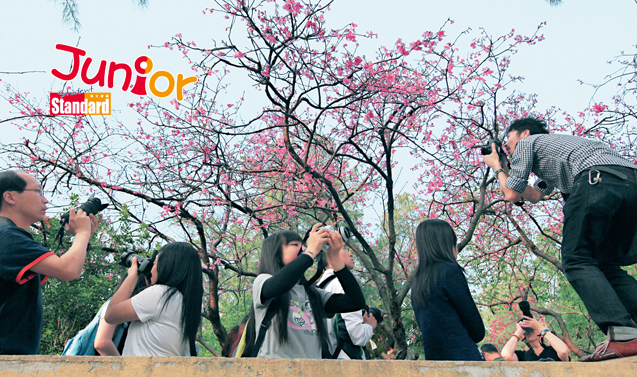 Sakura trees are not confined to Japan. Many places have cherry trees of their own. We in Hong Kong do not need to go to Japan to see them.

JAPANESE weather services all focus on the cherry blossom forecast when spring comes. Sakura at different cities begin blooming at different dates because of climate and temperature. The flowers usually start blooming on the southern island of Okinawa (沖繩) during early February, but in the northern Hokkaido (北海道) area, the flowers begin to bloom in May. This wave of forecasted sakura flower blooms is called sakura zensen, or the Cherry
Blossom Front.

But recently, sakura flowers have started blooming earlier, because the temperature is getting warmer because of global warming. For example, sakura in Okinawa began blooming in late January.

HANAMI means ‘flower-viewing’ and the Japanese admire the sakura for how beautiful yet short-lived they are.Some Japanese go to a hanami party not to admire fl owers, but to focus on the picnic. There is even a special phrase for it – ‘hana yori dango’ – dumplings over fl owers. Often the Japanese will drink saké or green tea with the food, and even dance under the cherry trees.

MANY places in the northern hemisphere are in the temperate zone where sakura trees can grow. So hanami parties are also held in places outside of Japan, such as South Korea (南韓), China, the US, and even Hong Kong.

• Cherry blossoms are not only pink. Many are white, and some are even yellow or green.

• Even though there is sakura ice cream and crisps, cherry blossoms themselves do not have much fl avour.

• The Japanese like using sakura flowers and leaves to make tea and traditional Japanese sweets, but only after pickling it with salt and plum vinegar.