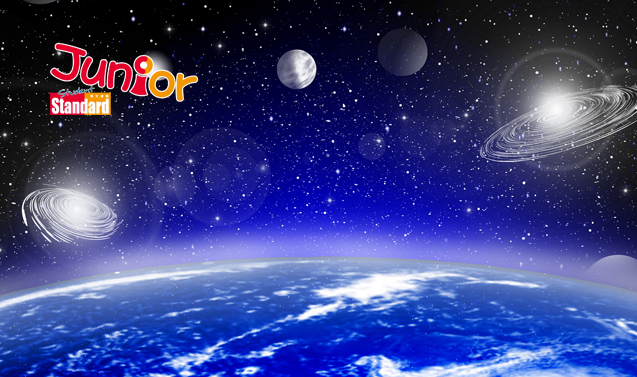 We have always looked up at night and wanted to explore the stars. Only 22 years ago, cosmonaut Valeri Polyakov returned to Earth after staying 438 days in space. He and many others paved the way for today’s space exploration, including China's first mission in 2003.

Although we did not gain the power to travel up into the cosmos until the 20th century, we have certainly been making up for lost time since then.

IN 1945, after the end of World War II (第二次世界大戰), the world entered a new world order. The US (美國) and Western Europe (西歐) were on one side, and the USSR (蘇聯) – the union of communist states including Russia, the most powerful one – and Eastern Europe (東歐) were on the other side. Those two sides were in a Cold War (冷戰) – no one actually fought, but both were def nitely competing as enemies. One of their ‘battles’ was to become better space explorers than the other.

THE two sides were eager to prove they could send things up above Earth. The USSR started the race by being the first to send an artifi cial satellite into space in 1957, in the form of Sputnik 1 (史波尼克1號).

Back and forth the two sides went, achieving feats like orbiting the Earth to flying around the moon, up until the US landed two men on the moon via the spaceship Apollo 11 (太陽神11號) in 1969, thus ending the so-called ‘space race’.

The first person on the moon was Neil Armstrong. He and Buzz Aldrin were the ones who fl ew to the moon on Apollo 11. As Armstrong took his fi rst step on its surface, he famously said, “One small step for [a] man, one giant leap for mankind.”

THE USSR dissolved in 1991, and Russia was on its own again. It and the US are cooperating in regards to space. They built a space station together, called the International Space Station (ISS, 國際太空站), by making new modules on Earth and then flying them up before attaching them to each other.

Astronauts do many experiments in the ISS, some of which include testing how humans – the astronauts – react to living in space for a long time. Alongside Nasa and Russia’s space agency Roscosmos (俄羅斯聯邦航天局), space agencies from Europe, Japan, and Canada jointly manage the ISS, and astronauts from those places have also gone up to the ISS.

China became a space power in 2003, when its astronaut Yang Liwei (楊利偉) successfully fl ew the Shenzhou 5 (神舟五號) into space. It currently has a space station of its own called Tiangong-1 (天宮一號) and is also trying to go to the moon. Other countries are trying to become space powers, too. India recently sent 104 artifi cial satellites up into space with a single rocket.

Young people wa...
A SURVEY has found that young ...