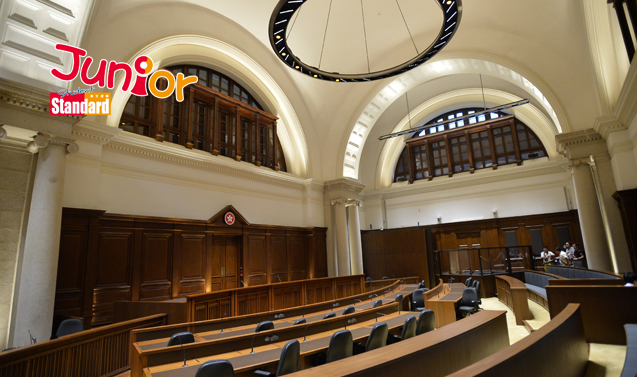 A jury is a panel of ordinary citizens selected to give verdicts based on the evidence presented in courts. The jury system ensures a transparent judiciary system no one can misuse.

ON 22 February, the former chief executive Donald Tsang Yamkuen (曾蔭權) was sentenced to 20 months in jail for his misconduct in public office. The verdict was reached when the ninemember jury ruled 8:1 that Tsang was guilty of corruption. But the jury could not decide on the charge of Tsang accepting an advantage, so there will be a retrial later this year.

What do the jurors do?

THE jury needs to ensure that justice is upheld. Based on the evidence brought forward in courts, the jurors deliberate together, so as to decide on the facts of the incident and decide whether the accused person is guilty of the charges or not.

Who can serve as a juror?

SERVING as a juror is a civic duty. In Hong Kong, any person aged between 21 and 65 can serve if he or she is of sound mind and has no hearing or visual impairments. Good character and fluency in Chinese or English are also required. Eligible citizens will be included in a list of jurors and selected randomly. However, some professions are exempted from it, such as Legislative Councillors (立法會議員) and newspaper editors. The court might also
exempt people with serious health issues or huge family responsibilities.

How is a verdict reached?

SINCE the deliberation is confi dential, nobody knows about what factors a jury considers to reach a verdict. Jurors however need to decide rationally and not emotionally. They also must not discuss the case with the others. Since the jury is formed by ordinary citizens, the verdict can reflect contemporary social values.

How many jurors are in a trial?

NOT all trials in Hong Kong adopt a jury system. Some criminal cases (eg, murder謀殺), civil cases (eg, defamation 誹謗) and death inquests are tried by a jury. Usually, there are seven or nine jurors for criminal trials, and five for death inquests. Five jurors is the minimum.

1. Why is it necessary to have a jury system to ensure the rule of law?
2. Why is a jury’s deliberation kept confidential?
3. Some research in the United Kingdom (英國) point out that complicated cases, eg, frauds (詐騙案), should not be tried by jury. Why?
4. Do you know about the other reasons of why a person could be exempted from jury services?
5. Which countries also adopt a jury system?

No change, says...
VISITING Hong Kong for the lau...