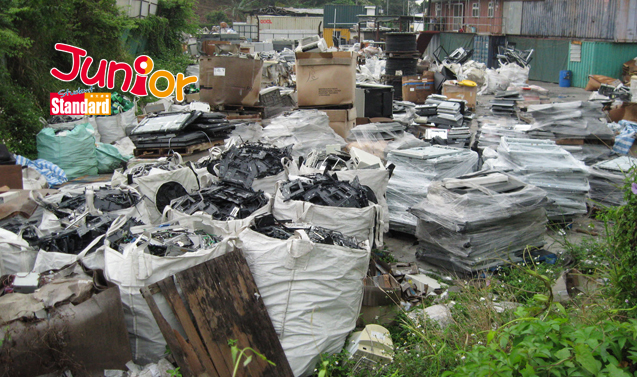 The town of Guiyu (貴嶼) in Guangdong Province (廣東省) gained notoriety as the dumping ground for electronic waste from around the world. Now Hong Kong appears to be taking over Guiyu’s mantle.

How was the problem found?

IN an experiment, the Seattle-based environmental group Basel Action Network attached GPS trackers to 200 damaged electronic items in the US. The group traced 37 trackers to Hong Kong. The unwanted appliances, many of which contain harmful materials such as lead and mercury, were left unattended in the New Territories.

The finding shocked many people because despite being a tech-savvy city, Hong Kong appears to lack a system to manage toxic e-waste.

Why is e-waste dumped here?

HONG Kong has unwittingly become a popular destination for e-waste because it is relatively close to Guiyu (貴嶼). In the past, developed countries such as the United States (美國), exported discarded electronic gadgets, including computers, to China for recycling.

But the mainland took action after becoming alarmed with the health and environmental problems that appeared. It was also frustrated at being called the ‘electronic graveyard of the world’. The mainland customs department launched Operation Green Fence in 2013 to curb imports of any ‘foreign waste’ that could pollute the environment.

Hong Kong, being the entreport for e-waste, received cargoes turned away by the mainland. The SAR can ban e-waste imports but its free trade policy puts in a tricky situation.

What harm can be done?

E-WASTE ends up at abandoned sites in the New Territories. This hi-tech rubbish can have hazardous effects on health and the environment. Toxic chemicals leaking from the old appliances can pollute the soil as well as the water that is used to irrigate cropland. Lead and mercury can damage the nervous system of humans.

It is worth noting that Guiyu, which once was a rice-growing area, can no longer produce crops and its water is undrinkable. Even worse, 80 percent of the children there suffer from lead poisoning and miscarriages are above average.

THERE is an urgent need to stop the accumulation of e-waste in Hong Kong. Legislators are pressing the government to follow up on the illegal dumping of e-waste. We should also keep a close eye on it.