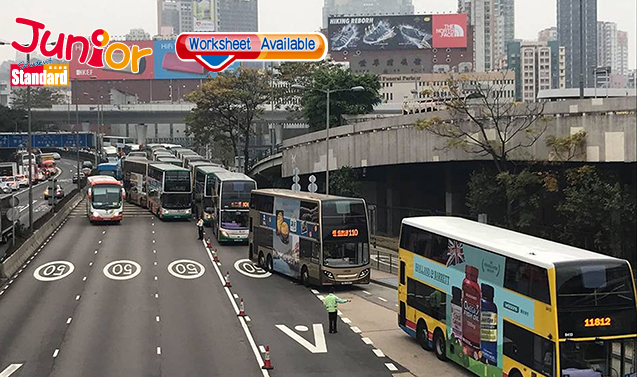 BUS drivers took industrial action after police fined some of them for offloading outside a designated stop area.

The Staff Rights Association KMB (九巴職員權益工會) called on members to stop their vehicles only inside designated areas. The action has resulted in minor congestions across Hong Kong. Since the dispute started, police have also prosecuted a dozen cabbies for stopping at the Jardine House (怡和大廈) bus stop.

A lawmaker quoted the chairman of the staff association, Li Kwok-wah (李國華), as saying the movement was not “work to rule” but “work in accordance with the law”.

Some conflicts occurred on Morrison Hill Road (摩理臣山道) as an illegally parked tourist bus prevented a Route 111 double-decker from moving into the bus stop, causing a small traffic jam.

The controversy started on 14 February when the Wan Chai District Council (灣仔區議會) discussed the danger to passengers getting on and off buses away from the bus stop. District councillor Yolanda Ng Yuen-ting (伍婉婷) blamed drivers and operators, and called for police to enforce the law. Days later a few bus drivers were issued penalty tickets for not offloading passengers at the stop area.

Ng later told a radio programme she was not maliciously picking on bus drivers, but only wanted the police to drive out the illegally parked vehicles. But Li was dissatisfied with the explanation, saying her remarks have already caused drivers to be fined, and demanded an apology from her.

(This article is published on Junior Standard on 27 February 2017)