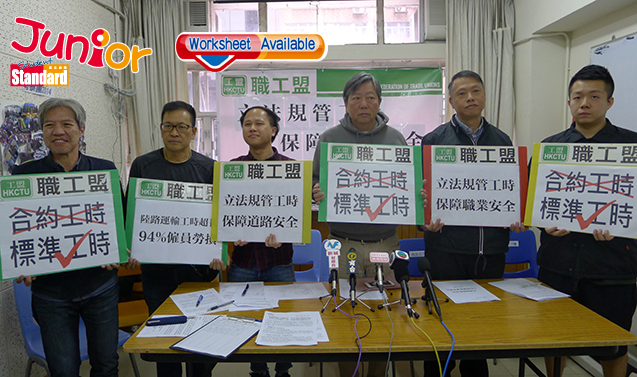 Ninety-four percent of workers reported health issues such as shoulder, nerve and intestinal problems due to long working hours and 60 percent said they had felt fatigue.

A bus driver for 20 years said there was always a need to work for 10 to 14 hours a day, and that could mean just .ve hours of rest, adding that “without enough rest it’s dif.cult to stay alert”. He said long hours in monotonous work have caused shoulder, knee and neuromuscular problems. And a lack of rest has weakened his immune system, resulting in frequent sickness.

The survey also shows 75 percent of workers do not eat regularly during working hours, and 40 percent said they drink less water to avoid a need for the toilet.

The HKCTU is campaigning for standard working hours of 44 to 48 hours a week – an international benchmark.

(This article is published on Junior Standard on 9 February 2017)