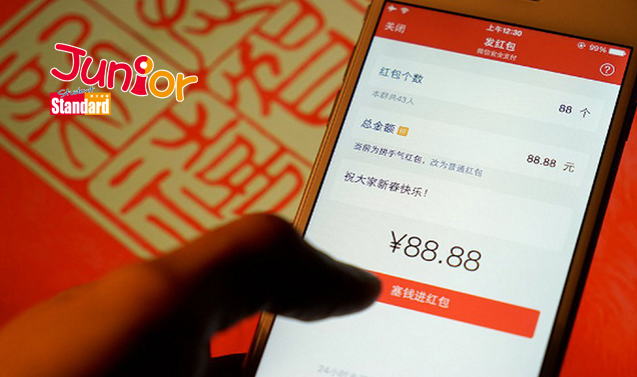 For many youngsters, the Lunar New Year is the most lucrative time of the year. That is when they receive red packets from their elders. Thanks to technology, they can now get cash gifts even when their relatives are far, far away.

How did digital money start?

TENS of millions of people in China send red packets or lai see stuffed with digital cash to each other on WeChat, the most popular social media in the mainland. This feature – launched in 2014 – has become enormously popular. More than eight billion red packets were sent over the messaging service during the Lunar New Year in 2016. The money in red packets goes directly to the digital wallet system developed by WeChat.

The success of digital wallets is part of the revolutionary transformation of monetary transactions in China. Digital wallet platforms are poised to replace traditional retail banks. China has WeChat and Alipay. Apple is developing an Apple Pay system and is competing neck-and-neck with Google Wallet.

Why are digital wallets popular?

THEY are convenient, requiring only a mobile device to make transactions. As long as a digital wallet account is registered, money transfers can be made online for things like paying for a taxi ride or buying a meal at a fast-food joint. Such transactions eliminate the trouble of carrying several credit cards or physical cash.

Platforms such as WeChat took a step further by allowing virtual money transactions to be made among friends. This flexibility has made WeChat Pay ubiquitous in major cities like Shanghai and Beijing.

Surprisingly, digital wallets are more popular in developing countries such as China and Kenya (肯亞). The European Union (歐盟), the US and Hong Kong are lagging behind, as digital wallet apps need to meet stringent requirements for online security in these places. But it is expected that they will become more available.

THE rise of digital wallets is the epitome of technological innovation in recent years. It may even shake the conventional notions of banks and currencies. In the future, you may not need ‘real cash’ anymore.

You may have to...
GAME apps that are supposed to...