The smart way to avoid pain 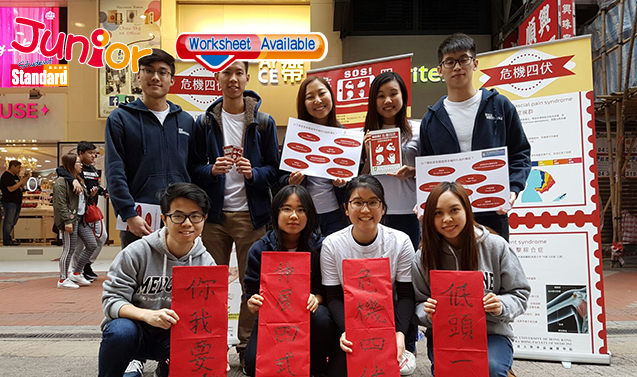 In their ‘SOS! Smartphone Overuse Syndrome’ campaign, the students set up banners in Causeway Bay (銅鑼灣) showing four major health syndromes, including painful inflammation of tendons of the thumbs and fingers, as well as neck and shoulder pains.

“We wish to increase public awareness of musculoskeletal problems related to smartphone overuse,” said Hugo Mak Ho-han. “It is a common problem in the population as many people use their smartphone all the time nowadays.”

Nine students demonstrated to pedestrians stretching exercises, including extending the arms to the front and bending fingers backwards to relieve wrist muscle tension.

The other exercises are extending all fingers fully to form the shape of a pyramid to stretch finger muscles, tilting the neck to one side and then the other, and stretching both arms backwards to relieve shoulder pain. The exercises were printed on cards and distributed outside the MTR exit near Sogo.

A Form 5 student said he found the exercises very useful. “My neck’s often painful after watching dramas from 10pm to 6am during weekends,” he said.

(This article is published on Junior Standard on 6 February 2017)