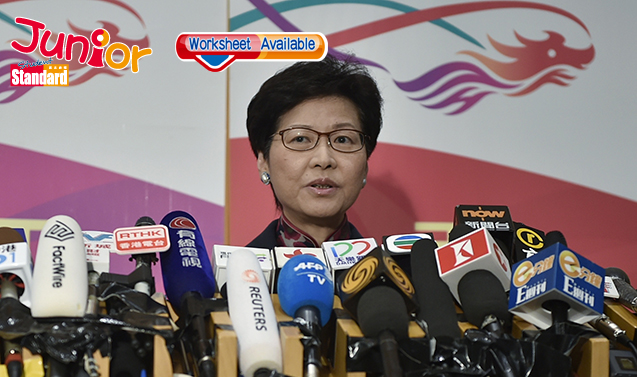 CARRIE Lam Cheng Yuet-ngor (林鄭月娥) has received mixed reviews as she aims to become chief executive. As Hong Kong’s No 2 ofﬁcial for the past four years, the outgoing chief secretary has shown a hardline and confrontational face, with a reputation as a tough official.

She has been called the ‘Iron Lady’ for her approach during times of crisis in her 36 years at the civil service. She is deemed as Beijing’s chosen one for the top job.

But the pro-democracy camp, which holds 327 votes in the Election Committee, warned that Lam will be just another version of the unpopular incumbent Leung Chun-ying (梁振英). Democratic Party legislator James To Kun-sun (涂謹申) hoped Lam should reﬂect on whether Hongkongers buy Leung’s hardline approach, which she said earlier she would adopt.

The camp has three principles that it will use to support a candidate: restart political reform, overturn the National People’s Congress’ August 31 decision, and defend Hong Kong’s core values.

Guild member Charles Mok (莫乃光) said it would be difﬁcult for the camp to support Lam, based on her performance over the past few months and her insistence on continuing on Leung’s path.

Lam has an ‘eight-point new vision’ for future policy-making, which includes nurturing youth for a wider talent pool.

(This article is published on Junior Standard on 1 January 2017)