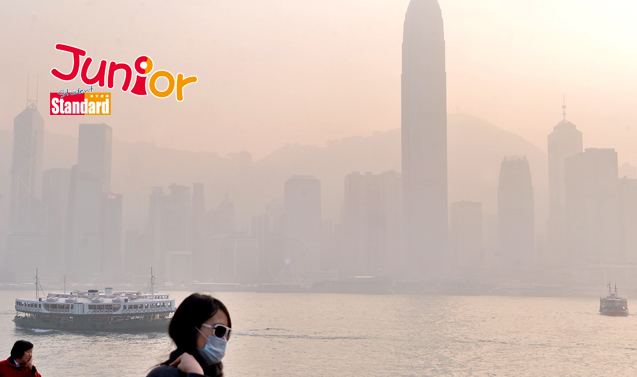 We suffer from pollution when the environment is filled with harmful substances. Urgent action is needed before the situation in Hong Kong and around the world worsens.

THERE was concern last week when the air quality dropped in many parts of Hong Kong. Tung Chung and Tuen Mun were hit hardest as the SAR felt a whiff of the dreaded smog that blanketed much of the mainland early this month. But some put the blame on local vehicle emissions. Whatever the cause, air pollution can be deadly to those with respiratory or heart ailments.

How do we measure pollution?

HONG Kong has the Air Quality Health Index which informs the public of the short-term risk caused by pollution on a daily basis. The health risk is low when the index reading is at 1, 2 or 3. When it climbs to 7, the risk is high, and it is very high at 8, 9 and 10. The situation is serious when the index is above 10. The reading reached 10 in Tung Chung and Tuen Mun on 8 January.

IT is short for particulate matter of 2.5 micrometres or less. This includes dust, soot, smoke and liquid droplets hanging in the air. PM2.5 is so fi ne that it enters the body easily through the nose or mouth and can reach the lungs. Thousands of them can fit on a full stop (.). This is an indication of how tiny they are. Long-term exposure leads to ailments including coughing, sneezing and shortness of breath. But those with respiratory and heart diseases risk death. In Tung Chung last week, the level of PM2.5 particulates reached dangerous levels.

What action is being taken?

THE government is phasing out old diesel vehicles. It is also trying to control emissions from ships and power plants, but admits that it has yet to meet its air quality objectives. Hong Kong is working with Guangdong to tackle regional smog.

What about the China factor?

POLLUTION is a severe problem in the mainland, which relies on coal to produce much of the energy that keeps its factories running. China began 2017 by issuing the red alert – its highest warning – for severe fog which closed roads and airports. But some say China cannot be blamed for all of Hong Kong’s pollution crisis.

1. Why is Hong Kong plagued by pollution when it does not have an industrial base?
2. Is the government doing enough to fight pollution? Can you suggest more ways to clean the city’s filthy air?
3. State how the government can get more support from big business and the public to tackle pollution?
4. China has vowed to clean up its act, but can you say how it can enforce antipollution measures effectively?