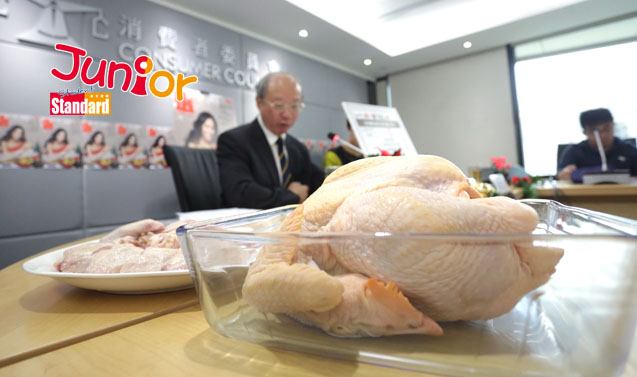 THE Consumer Council found more than 60 percent of chickens sold in Hong Kong contain a superbug, with a higher proportion in mainland and local products.

It urged the government for tougher regulation in the use of antibiotics in food animals.

The council tested 100 products sold in markets and supermarkets for the presence of a superbug called ‘ESBL-producing Enterobacteriaceae’ (耐藥腸桿菌科細菌).

Sixty-two samples were found to contain the superbug, which is resistant to third-generation antibiotics.

All six samples of daily slaughtered fresh chicken were found to contain the bacteria, while 92 percent of live chicken freshly slaughtered on site were also contaminated.

Among samples found to have the bacteria, locally farmed chicken were 96 percent contaminated, samples from the mainland 79 percent, South American samples 63 percent and European samples 46 percent.

Just 15 percent of North American chicken and 11 percent of those from New Zealand and Australia were contaminated.

The council noted that Hong Kong people tend to cook chicken “just right” to maintain its tender texture. “It is necessary to cook the chicken thoroughly in order to kill all antibiotic-resistant bacteria in the meat,” advised a council spokesman.

People should also be careful when handling raw chicken to minimise the risk of cross-contamination.

Superbugs that enter the human body could cause infections that are untreatable by ordinary antibiotics when the immune system is weakened.