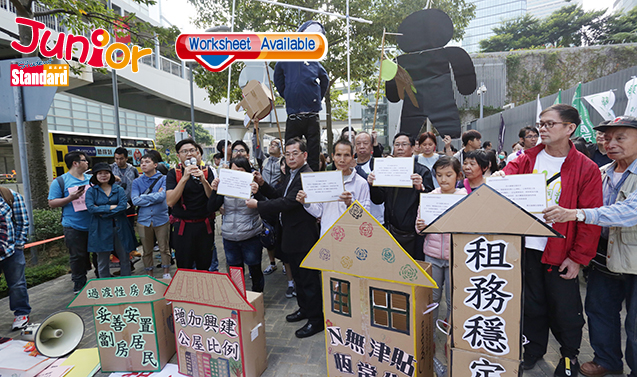 LIFE is getting harder for families of ‘N have-nots’ (N無人士) and rising rent is the main culprit. The Society for Community Organisation (SoCO,香港社區組織協會) found in a survey that rents for partitioned flats jumped 10.5 percent this year over 2015.

This has brought greater financial pressure on the N have-nots, defined as poor households who do not live in public rental housing, do not qualify for the dole (Comprehensive Social Security Assistance), and do not earn enough to pay the salary tax.

SoCO found that 32.3 percent of their income goes to rent, up from 30.8 percent last year. It lambasted the government for discontinuing the Community Care Fund’s (關愛基金) annual subsidy of HK$4,000 to the N have-nots in the coming fi nancial year.

The subsidy was originally introduced in December 2013 to ease the living pressure of those who did not benefit from budget sweeteners.

But the government says it is no longer necessary as the new low-income working family allowance and transport allowance that each provides HK$600 per month should alleviate the burden of the N have-nots. But SoCO found that almost half of all N have-not families are not eligible for the new allowances.

The government expected the new allowances to benefit 200,000 families during the first year of its launch, yet fewer than 28,000 cases were approved in the fi rst six months. SoCO called for official rent controls, limiting increases to no more than 18 percent every two years.

(This article is published on Junior Standard on 16 December 2016)

Mindful of the wealth gap
https://goo.gl/Zhnbyg