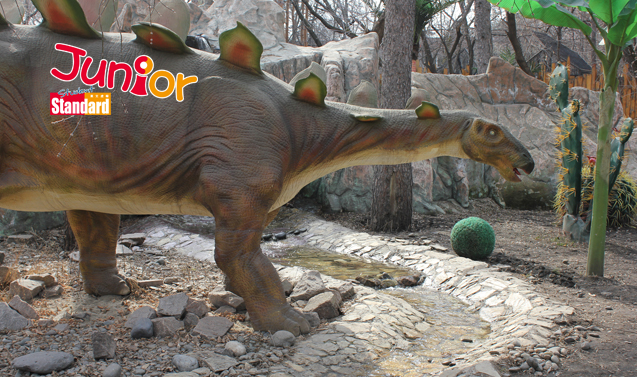 Scientists studying fossils are enjoying a golden age. Technology now allows them to examine the insides of old bones without causing any damage.

IN 1994, the bones of a giant prehistoric creature were discovered in England. Palaeontologists called it a pliosaur and learned a lot about the ancient predator from its fossils. But they were limited to looking at the outside of the fossil. Now modern technology enables the scientists to investigate beneath the surface of the bones and this breakthrough has helped increase their knowledge of the animals that roamed the Earth many, many centuries ago.

DINOSAURS and other prehistoric creatures were very complex animals and there are still many questions about them that await answers. Scientists have used X-rays for years to probe deeper, but advanced technology like micro-computed tomography (micro-CT) can go even further. Micro-CT is so precise that scientists can now map the size of a prehistoric mammal’s brain and even tell us what its earbones looked like. In the case of the pliosaur, micro-CT scanning revealed that new teeth were still growing in its jaws when it died.

Homing in on prey

ANOTHER new technique helps palaeontologists determine how ancient predators bit their prey. Using this method they found that a pliosaur has the same biting power as a Tyrannosaurus rex. The scientists also found that pliosaurs had weak skulls despite having strong jaws. Another discovery is that pliosaurs probably brought their prey close to the back of their jaws as posssible, where their bite was the strongest.

FOSSILS can retain some organic matter for up to half a million years after death. Accessing this DNA, however, is extremely tricky. The fossil is often badly damaged in the first place. Researchers have to be extremely careful not to contaminate samples. By examining DNA, all sorts of data can be revealed, including population changes of entire species. For example, the DNA of wooly mammoths showed no signs of a diminishing population before they disappeared altogether. In other words, their end was sudden and without warning.

First-ever land...
LANDING with a bounce after tr...