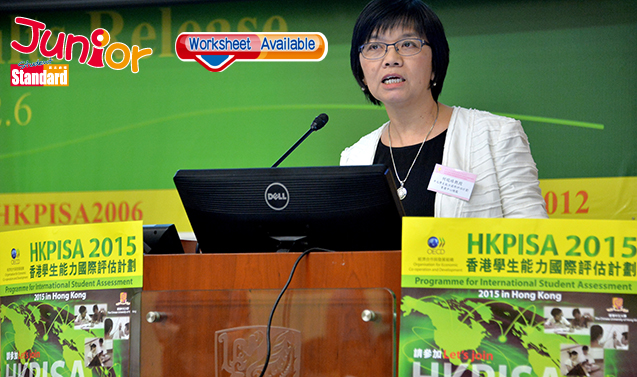 But Hong Kong plunged to ninth in science – from second four years ago – behind Singapore, Japan, Taiwan and even Macau. Singapore topped all three areas.

The Hong Kong Institute of Education Research at the Chinese University randomly picked 5,000 15-year-old students from 138 schools for the computer-based assessment.

Esther Ho Sui-chu, director of the Hong Kong Centre for International Student Assessment (學生能力國際評估計畫香港中心總監何瑞珠), said since the new senior secondary curriculum was implemented in 2009, the average number of weekly science classes dropped from 7.22 to 5.53 in 2015. This could have caused the nosedive.

Also, fewer students now choose all three science subjects – physics, chemistry and biology. Assistant professor Victor Lau Kwok-chi of CUHK’s department of curriculum and instruction (中大教育學院課程與教學學系助理教授劉國智) said the drastic curriculum change could be responsible for the weak science performance. He said students’ science foundation is not extensive enough, adding that the current science education in secondary schools should be reviewed.

(This article is published on Junior Standard on 13 December 2016)