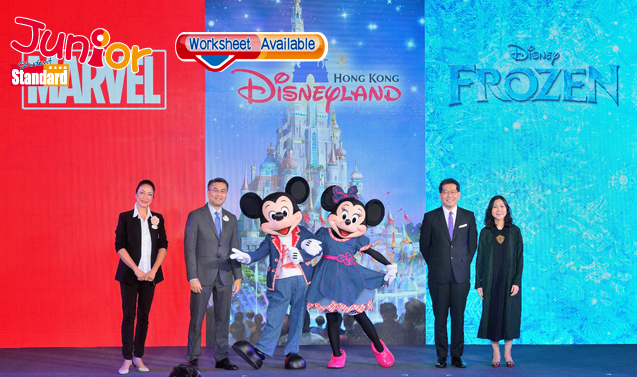 The new zones will be based on hit movie Frozen (魔雪奇緣) and the Marvel super heroes (漫威英雄). The upgrades will also include a revamped castle and a performance venue based on Moana (魔海奇緣). They will be completed in phases from 2018 to 2023.

As the Hong Kong government owns 53 percent of the park, taxpayers will pay a bigger share of the expenses – HK$5.8 billion.

The government hopes the new attractions would boost annual visitor numbers to 9.3 million by 2025. The park’s admission dropped to 6.8 million last year from 7.5 million the previous year. It also suffered a loss of HK$148m in 2015 compared to a profit of HK$332m in 2014.

Secretary for Commerce and Economic Development Gregory So Kam-leung (商務及經濟發展局局長蘇錦樑) hoped the expansion will bring more high-spending, overnight visitors to the SAR. He said the plan would create 3,500 construction jobs and 600 full-time jobs after completion.

But the Democratic Party’s James To Kun-sun (涂謹申) said the new theme areas will only pay off if its uniqueness remains and similar features are not built at Disney parks in Tokyo or Shanghai.

(This article is published on Junior Standard on 29 November 2016)