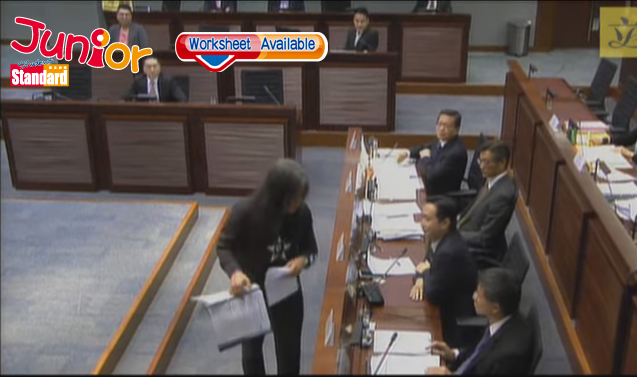 AN administration official is gunning for activist democrats in the legislature after a grab at a development panel meeting last Tuesday. Undersecretary for Development Eric Ma Siu-cheung (發展局副局長馬紹祥) complained to police that his document folder was snatched.

A central character in the incident is ‘Longhair’ Leung Kwok-hung (梁國雄), who became agitated at the meeting as he tried to pin down Ma for a reason he had not turned up with documents concerning engineering firm Arup (奧雅納).

Arup had just been banned from bidding for government contracts for three months as it had leaked plans about the controversial development of Wang Chau (橫洲) in the New Territories, where villagers will be uprooted to make way for public housing.

With Ma unwilling to show the League of Social Democrats (社民連) legislator what was in his folder, Leung grabbed it and passed it to the Land Justice League’s Eddie Chu Hoi-dick (朱凱.) before he was hauled from the meeting room.

Chu, a champion of Wang Chau villagers, fiicked through the papers amid the bedlam. Ma complained to police two days later. Of.cers of the Central regional crime squad were said to be investigating.

The Development Bureau (發展局) issued a statement saying the papers in the folder were “confidential documents”. It said Ma reported to police because the matter was serious, and that the bureau “condemned” the two councillors.

(This article is published on Junior Standard on 23 November 2016)