Bus and taxi collide in tunnel 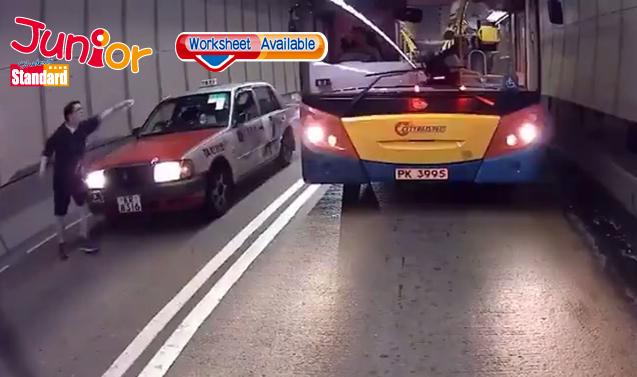 A CITY Bus (城巴) double-decker and a taxi collided inside the Aberdeen Tunnel (香港仔隧道) last Saturday after the bus driver allegedly refused to give way to the cabbie, who appeared to be trying to cut him off, video footage showed.

No one was injured in the incident that happened just before 8.30pm. The two drivers were arrested and released on bail. The bus driver was later sacked by his company.

Video footage from another vehicle surfaced online, showing the taxi and the bus travelling close to each other as they approached the tunnel heading towards Wan Chai.

The cabbie, aged 43, appeared to increase his speed to try and switch lanes. But the bus driver, aged 59, allegedly increased his speed too.

Inside the tunnel – which has double white lines banning overtaking – the taxi swerved close to the bus and the two vehicles collided. The bus driver then drove away for a few seconds, followed by the taxi, before both stopped in the middle of the tunnel.

The taxi driver got out of the cab, pointed to the bus driver and had a few words with him. The bus driver remained in his seat as some passengers walked around inside the bus. A police spokesman confirmed that the taxi and bus collided inside the tunnel.

Institute of Motor Industry Hong Kong (香港汽車工業學會) chairman Ringo Li Yiu-pui (李耀焙) said the incident showed the poor driving attitude of some professional drivers. He urged all motorists to be patient when driving on the road.

Revenge: Will you feel better?
https://goo.gl/2RoznQ