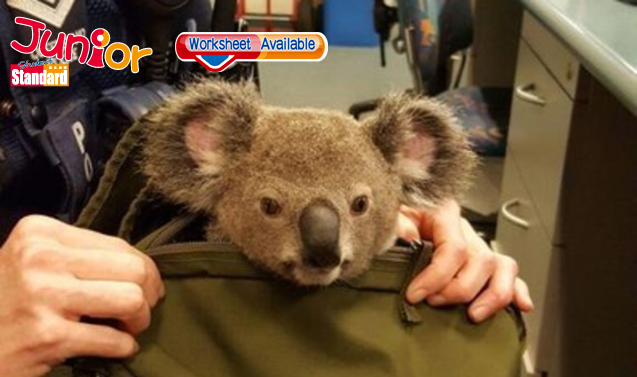 AUSTRALIAN police uncovered a baby koala hidden in the bag of a woman they stopped in the street. The 50-year-old, who was questioned on unrelated matters, stunned Brisbane (布里斯本) of.cers when she revealed she had the joey, as baby koalas are known, in her canvas satchel.

“Not quite believing their ears, the of.cers cautiously unzipped the bag and found this gorgeous boy,” a Queensland (昆士蘭) police spokesman said.

The name koala means “no drink” in one of the Aboriginal languages, as they do not need to drink very often, but this one was found to be “a bit dehydrated.” Other than that, the six-month-old baby koala seemed to be in good health.

The woman claimed she found the joey, which is protected under the country’s Nature Conservation Act, and had been caring for it. It was handed to the RSPCA, which named him Alfred. “He’s been on .uids but is doing well and will shortly be going out to a carer,” said a spokesman.

The woman was subsequently arrested over “outstanding matters,” police said.

The much-loved koala has been under increasing threat across Australia in recent decades, particularly from habitat loss, disease, dog attacks and bush.res. While they are not an endangered species, their numbers have dropped from millions to only 80,000.

The Australian Koala Foundation warned that if this trend goes on, koalas will be heading for extinction. The foundation noted that it is illegal to keep koalas as pets anywhere, even in Australia.

(This article is published on Junior Standard on 14 November 2016)

You’ll never guess what we found inside one woman’s bag
https://goo.gl/wG7hgP