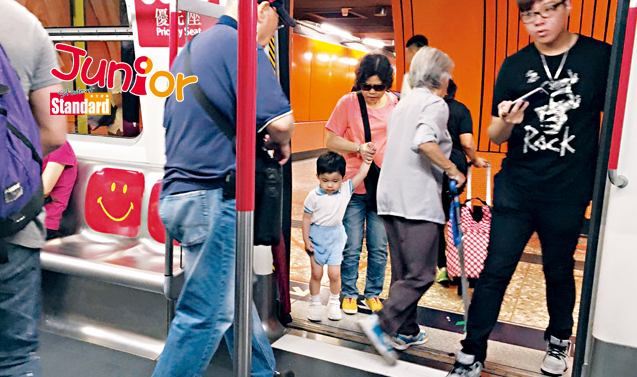 You must have noticed the MTR’s priority seats – they are the red ones with smiling faces painted on them. Passengers are encouraged to reserve those seats to people in need, ie, the disabled, the elderly, pregnant women and those with injuries. The MTR Corporation has proposed doubling the number of priority seats, but its move has sparked a debate.

Giving up one’s seat to an elderly passenger or a pregnant woman should come naturally. But is this a good deed or an obligation?

PRIORITY seats were introduced on MTR trains in 2009 so that passengers who need to sit will not be left standing, especially in jam-packed trains on a hot and humid summer’s day. They are mainly the elderly, pregnant women, passengers with injuries or the disabled.

Soon after, buses and some chain restaurants began installing priority seats. In recent years able-bodied people who occupied these seats have been condemned online. There have even been altercations on trains when passengers did not give up the priority seats to those who needed them.

A recent MTR proposal to double the number of priority seats from two to four in each compartment has caused a public uproar. Some say instead of trying to foster a caring and inclusive society, extra priority seats will only create more resentment and quarrels.

MUCH of the anger is directed at phubbers. These are people who are so focused on their smartphones that they ignore the swirling mass of humanity around them. The term phubbing is a combination of two words – phone and snubbing. Tempers rise when commuters see a phubber engrossed in a video game while a tired, pregnant woman looks longingly at the priority seat he or she is occupying.

On the other side of the coin, some people feel that reserving seats for some sectors of society is downright unfair. They argue that the elderly and the disabled are already enjoying discounts, paying only HK$2 per trip.

Hard to tell a deserving case

ATTITUDES vary in other places. In Taiwan (台灣) more than 7,000 netizens signed a petition in September to abolish special seats in public transport systems. The movement was launched after an able-bodied secondary schoolgirl was insulted publicly for not giving up her seat.

Then another student was also condemned – but in this case the student was blind although no one could tell. This leaves us with the question – how can we be sure whether someone in such seats is not blind or deaf? Can we judge by physical appearance or age?

A SURVEY in August showed that only 44 percent of Japanese (日本人) interviewed actively surrender their seats to those in need. That is mainly because the Japanese consider that they would be troubling others if they accepted the offer. Sixty percent of the respondents said they would not occupy priority
seats.

In South Korea (南韓), the elderly are highly respected and there are designated seats for them. Koreans will scold those who refuse to give their seats to senior citizens.

Special cards and the law

IN the United Kingdom (英國), ‘priority seating cards’ are issued to those who need them. Holders can show the card to ask a fellow passenger to vacate a seat, but that person is not obliged to do so.

In some cities in the United States (美國), Canada (加拿大) and Australia (澳洲), the law requires people to offer seats to those in need. Offenders are penalised.

GIVING up one’s seat is a courtesy that we need to advocate. In Hong Kong, there are video clips and posters promoting this habit. But should we have to resort to legal means? What else can be done to ensure that everyone benefits and no one is discriminated against? How can we create a caring society?

-The MTR Corporation has proposed doubling the number of priority seats to four in each compartment. The suggestion has provoked a public debate.

-An online poll in Taiwan had 7,000 responses in favour of scrapping priority seats. Japanese consider accepting seats is troubling others.

-In South Korea, people face a tonguelashing if they do not surrender their seats to the elderly.

-In some Western cities, it is mandatory to offer seats to those who require them.

1. What is your view about giving up seats to others?

2.Have you offered your seat to others? Who were they and why did you do it?

3.What do you know about priority seats? Would you occupy such a seat if it is the only one free?

4.Who do you think should occupy these priority seats?

5.Do you think that there should be more priority seats on the MTR? Why?

6.How can we encourage passengers not to ignore other passengers in need of a seat?