Face-to-face with a killer shark 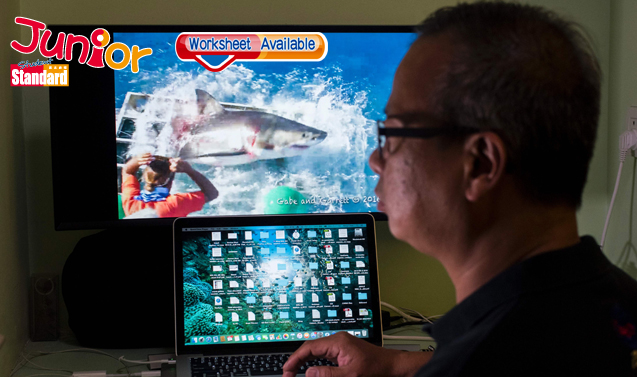 YOU definitely do not want to become an online video star the way Chan Ming did. The Hong Kong diver had a close encounter of the scary kind with a great white shark. The species is responsible for the largest number of fatal shark attacks on humans.

The video of the unlikely meeting off Mexico (墨西哥) earlier this month has become a YouTube sensation that has been viewed over 17 million times. Chan, 51, a part-time diving instructor, was in a protective cage on a shark-watching trip when the big .sh broke in, going after bait.

Unable to swim backwards, the predator carried on inside where Chan was alone. He said he willed himself to stay calm because “if I panicked it would be very horrible in there”.

The shark was bleeding when it escaped through a gap on top of the cage opened by a boat crew member. Chan emerged through the gap unharmed after a few tense moments.

The incident did nothing to diminish his fondness for sharks and he was back in the water the next day. Chan, who works in advertising in Shanghai, said the great whites are “very beautiful and cute”.

Sharks are sighted in Hong Kong waters occasionally. Nets have been installed at 32 public beaches to protect swimmers.

People are advised to stay out of the water when the shark warning .ag is hoisted. To avoid shark attacks, people should not swim alone, at dawn, dusk or night, or when they have an open wound.

(This article is published on Junior Standard on 25 October 2016)