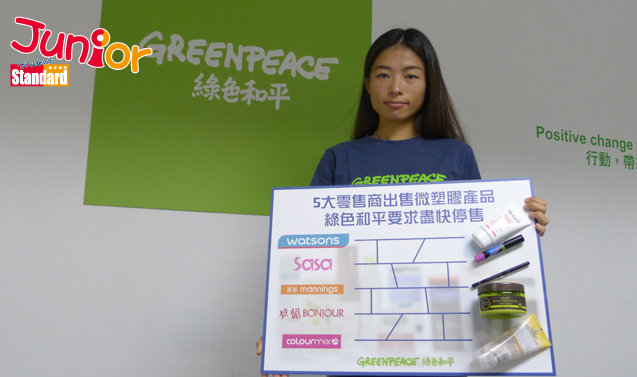 These included body scrubs and face wash as well as sunscreen and make-up such as eye shadow and power foundation. Results showed that 37.5 percent of these products contained microplastics, according to their label of ingredients.

Nearly half failed to provide clear labelling on their products or had the ingredients listed in Japanese or Korean, which most Hong Kong people cannot understand.

Greenpeace said while it is a common belief that only facial cleansers and scrubs contain microplastics, they are more commonly found in cosmetics such as eyeshadows, foundation and lipstick.

Every day in Hong Kong, 4.8 billion microplastics .nd their way into the sea, the group says, polluting marine environments and even having an impact on the seafood we eat. Greenpeace called on the public to urge big retailers to take action and stop such pollution.

The US recently becomes the .rst country to announce a ban on microbead use in cosmetics.

(This article is published on Junior Standard on 19 October 2016)

How can we avoid microbeads in Hong Kong
https://goo.gl/jZYVy6