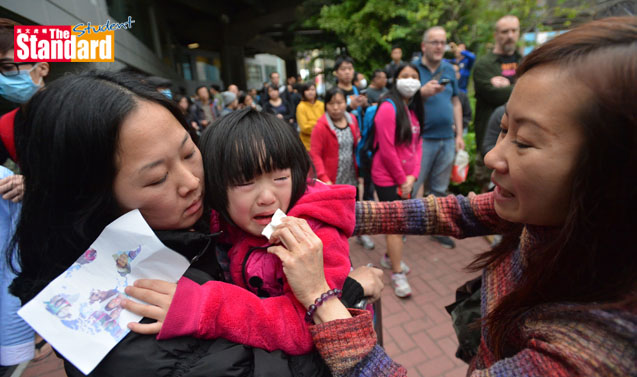 MAINLANDERS are planning to recruit a 14-strong ‘quarrel team’ to deal with Hong Kong hecklers at future demonstrations.

Activists said on Weibo (微博 ) that recruits will be paid 3,000 yuan (HK$3,715) each and trained in how to scold parallel trading protesters.

A user with the name ‘Kim1Chan’ wrote, “Plan to form a quarrel team to make its way to Hong Kong next month, salary 3,000 yuan.

“Training starts from 9am, including eloquence, voice volume, speed of speech and ‘fierce capacity’. Get-off time is 5pm. One meal will be included.

“Squad size about 11, with three bench players. Bonus of 300 yuan will be given if a Hong Kong person cries due to the scolding.”

The posts were in reaction to a young girl who cried after she and her mother were heckled in Tuen Mun (屯門). The second message was deleted a short while later. The protester who heckled them has since apologised, saying he had mistaken the mother for a parallel trader.

The 47-year-old man, surnamed Chan, was arrested later for being disorderly in a public place.

Mainlanders reacted differently to the plan to strike back.

‘Happy Zhang Jiang’ said she can tolerate the hecklers; ‘Libertine’ said he wants to apply for the job; while ‘Takanashi Rikka’ said it is a meaningless act.

Hong Kong users were generally not worried about the plan.

‘Adaylar’ advised mainlanders to apply for a work visa, while ‘Giant wheel dragon’ said he is not afraid.