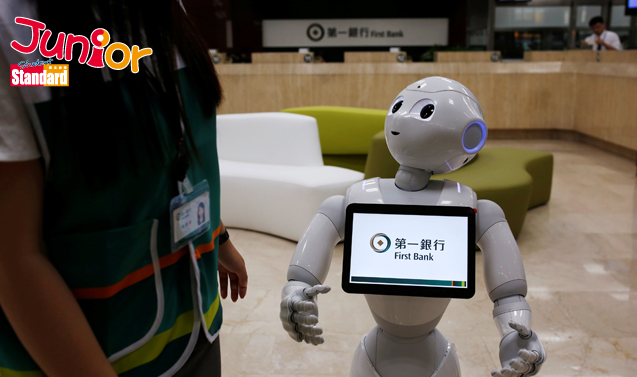 AN army of obedient workers is joining two banks and an insurance firm in Taipei (台北). But they are not paid for their job which is to set up customers for hard sells.

The workers are 120-centimetre tall robots with wide-eyed faces and white plastic bodies. They get around on rollers. There are tablets on their chests and all of them are called Pepper.

The Chinese-speaking robots go to work by telling waiting customers: “It’s my honour to serve you.”

Programmed to flatter, they guess ages – and trim off years in doing so. Then they move in for their kill, talking about .nancial products and pointing customers to sales staff.

Pepper is capable of identifying the principal emotions – joy, sadness, anger and surprise.

Recently, car maker Toyota (豐田車廠) unveiled Kirobo Mini, a 10-cm doll-like robot that can talk with people, supposedly with the intelligence level of a five-year-old. The company said Kirobo Mini’s value is emotional – as a faithful companion.

Many people in Japan live alone. They need someone, or in this case something, to talk to, a company spokesman said.

Some may find it depressing or even disturbing to see a society where lonely people have to talk to machines. But proponents say the technology can serve as a tool to help care for the sick or the elderly.

(This article is published on Junior Standard on 13 October 2016)

Find out more about Pepper
https://goo.gl/AcGl15