Life at the bottom of the housing ladder 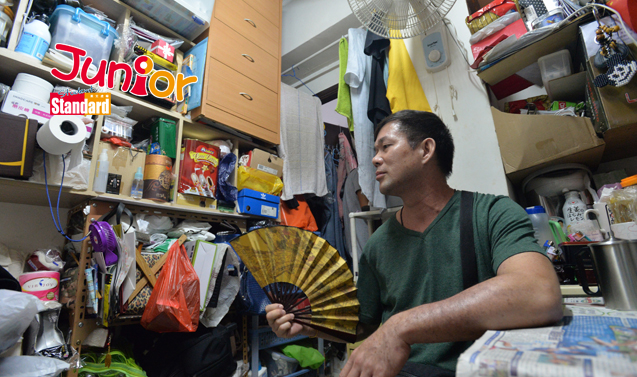 Many people in Hong Kong want to own a home. But this is becoming harder to achieve and many are forced to rent tiny, unsafe units. In the first of our articles on the city’s housing crisis, we take a look at ‘subdivided units’.

What is a subdivided unit?

IT is a living area carved out of a residential fl at into two or more partitioned units. They are commonly found in old residential buildings or disused industrial buildings. The unit could be around 150 square feet with basic kitchen and toilet facilities. The government says 195,000 people live in subdivided units, but the real number is believed to be much higher.

What problems do tenants encounter?

SUBDIVIDED flats are unsafe and uncomfortable. Many do not adhere to structural and fire-safety regulations. The inner walls of these units, for instance, are not fireproof. Blocked staircases pose another danger if a fire breaks out.

The units are notorious for poor ventilation. Some have no windows so it can be as hot as 37C indoors in summer.

Why then do people still live in such units?

THE main reason is that they are cheaper to rent than a private apartment. The average monthly rent of a subdivided unit is HK$3,500, which is low enough for grassroots households. Many subdivided units are located in convenient areas such as Yau Tsim Mong district, so tenants save on transport costs.

Can this housing problem be tackled effectively?

IN the short run, the government should punish landlords of fl ats that are death traps for tenants.In the long run, the housing policy has to be improved. Subdivided units emerged because of inadequate public housing and surging property prices. If there is an increase in public housing fl ats and also property prices come down, there will be no need for people to live in subdivided units.