Controversy in the chamber 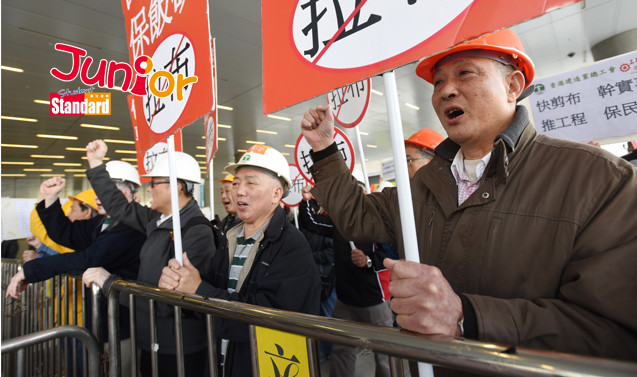 In recent years, filibustering (拉布) in the Legislative Council (立法會) has often been in the headlines. What were lawmakers trying to achieve?

What is a filibuster?

THIS is an action, usually a series of longwinded speeches, aimed at blocking or delaying government proposals. It takes up a lot of time but it is lawful. Legislators use it as a tactic if they are unhappy with a bill, ie, the proposal.

When did this tactic take hold here?

IN 2009, some lawmakers fi libustered to postpone the approval of funds to build the high-speed railway (高鐵) to Guangzhou. At that time, the project was estimated to cost HK$68 billion.

Legislators who opposed the plan delivered long speeches and introduced amendments. Funding was approved in the end but since then filibustering has become common.

What do citizens feel about filibusters?

SOCIETY has mixed views. Some think that lawmakers should use filibustering as a last resort to delay the approval of bills which they think are against the public interest. In some cases, the government was forced to withdraw its proposals because the legislature ran out of time as a result of filibustering.

For example, the high-speed railway was considered to be too costly. The public did not get all the facts until lawmakers began debating the project. By filibustering, some lawmakers hoped that the proposal could be delayed to allow time for reconsideration.

Those who oppose filibustering think it disrupts the work of the government. They say marathon debates are a waste of time and public money.

When lawmakers resort to filibusters, others bills, such as funding for the elderly, hospitals or the Civil Service, are held up. This will affect society and government operations.

THE new Legco term began on 1 October. It is important for us to keep a close eye on issues discussed in the chamber. After all, what is debated there ultimately concerns the interest of everyone.