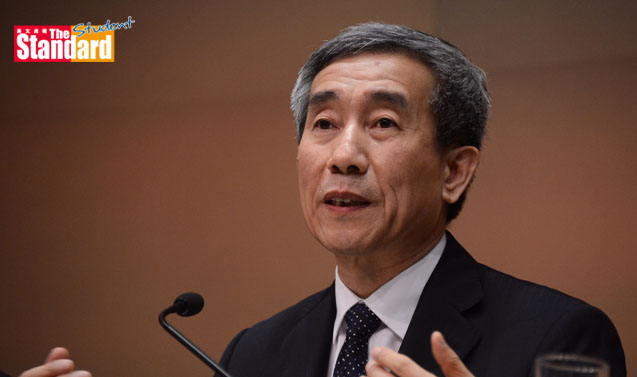 A source said the visit was cancelled as Beijing (北京) believes the pan-democrats are not sincere about holding discussions. Li had planned to meet some pan-democrats during a visit to attend the 4 April anniversary of the promulgation of the Basic Law.

“Conversation is necessary in order to solve a conflict,” Lam said.

“But those who join the conversation should be positive and have the goodwill to solve the problem. But before it is confirmed that Li might not be coming to Hong Kong, I don’t want to make further comments.”

Pan-democratic lawmaker Emily Lau Wai-hing (劉慧卿) said it is ridiculous for Beijing to cancel Li’s visit just because they held a press conference pledging to veto the political reform, since their action is not something new.

Meanwhile, Basic Law Committee member Rao Geping (饒戈平) has called on pan-democrats to listen to public views. Rao, a Peking University (北京大學) scholar, said he had expected the resistance but he hopes the pan-democrats will consider the broader interests of the country and Hong Kong.

Democratic Alliance for the Betterment and Progress of Hong Kong (民主建港協進聯盟) lawmaker Tam Yiu-chung (譚耀宗) said it is unnecessary for the pan-democrats to adopt a tough stance on reform.

In a public display of unity, pan-democratic lawmakers last Monday presented a three-point manifesto confirming they will reject any political reform package that is based on Beijing’s 31 August decision.

Civic Party (公民黨 ) leader Alan Leong Kah-kit (梁家傑) said the act of unity will put an end to any “unnecessary speculation” that some of them will do a U-turn on vetoing the reform when it is tabled at the Legislative Council (立法會).